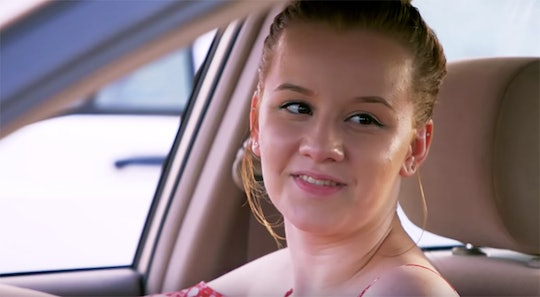 Teen Mom Young & Pregnant star Kayla Sessler is in an incredible headspace place these days. Why, you ask? You can thank Kayla's new boyfriend, Luke.

Kayla and her ex-boyfriend, Stephan, share a 1-year-old child together named Izaiah. And as most young relationships go, the two have had their fair share of issues. But things between the two came to a troubling head after Kayla told Radar Online that she filed a restraining order against Stephan due to an alleged domestic abuse incident.

"My friend called the police on him. He ended up not getting arrested because police said they did not have enough evidence even though I had bruises on me," she told Radar Online.

Now that Kayla is in a relationship with Luke, the connection she once shared with Stephan has deteriorated completely.

"Stephan and I have no relationship. He doesn’t see Izaiah," she explained. "When I got a new boyfriend he shied away a lot."

Speaking of that "new boyfriend," it looks like Kayla made it official with Luke in August. "Not the best photo but we're having the best time," she captioned an Instagram shot of the pair in New York City.

So, how did the lovebirds meet? It turns out Kayla knew Luke from high school, even though they didn't talk much back then.

“We did go to high school together, but we never really talked too much because I was dating Stephan my whole high school,” Kayla said, according to The Ashley's Reality Roundup. “Stephan does know him too, but they’re not really friends.”

As fate would have it, Kayla bumped into Luke again while she was registering for college courses. The two then hit it off, with Kayla soon posting coupley pictures to Instagram.

Now that Teen Mom Young & Pregnant is back, fans get to witness the pair's relationship blossom on-screen.

“Right now me and him we are just basically getting to know each other better and seeing if we have a connection, or if something could be there," Kayla said during a recent episode, according to Starcasm.

Prior to Luke's relationship with Kayla, he enjoyed a successful basketball career. And by the looks of it, he plays college basketball with a team called the Kougars.

Luke's Instagram account is chock full of basketball-related photos, but he does post shots with Kayla on occasion. "I’m winning on and off the court," he captioned a cute shot with Kayla.

I see what you did there, Luke.

As for Luke's relationship with Izaiah? He clearly adores the little guy.

"Happy 1st Birthday to my young bull Zay love you kid," he captioned a sweet photo of Izaiah on his birthday.

Kayla is appreciative of their strong bond, writing on Instagram: "Forever thankful for my boys."

Unfortunately, Stephan isn't happy about Kayla moving on. In a teaser clip for Teen Mom Young & Pregnant, Kayla complains to Luke about Stephan's angered reaction, while mentioning that he sent her a ton of texts about the development. Sigh.

Fans can only hope Stephan gets over his hurt feelings for Izaiah's sake — he's what's most important, after all. Either way, it's clear Luke and Kayla are it in for the long haul.