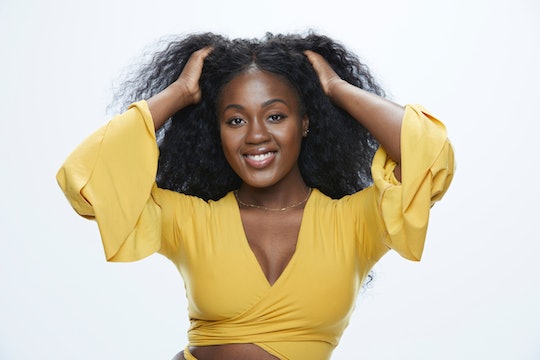 Kemi Faknule Is Determined To Succeed On 'Big Brother'

Big Brother Season 21 premieres on CBS on Jun. 25, bringing with it a new house filled with a new cast ready to face a new set of challenges. Each person will have specific strengths and weaknesses as a competitor. While it's difficult to say ahead of time how they'll handle themselves in the house, taking a closer look at some of the contestants could help figure it out. Discovering more about who Kemi Faknule is on Big Brother lets you know what to expect from her.

According to her official CBS bio, Kemi is a 25-year-old marketing strategist from Elkridge, MD who has since relocated to Brooklyn. She thinks of herself as a positive person who can always find the silver lining in any given situation. She's also goal-oriented and will do whatever it takes to accomplish them. And Kemi admits that she can be "extremely vicious" once provoked, though she adds that it took her 24 years to "learn the difference between 'feeling provoked' and actually 'being provoked.'" That should make disagreements in the house really fun.

She enjoys shopping, dining out, and traveling, so she may find herself a little constrained in the Big Brother house. However, her biggest fear isn't boredom or being stuck in one place. Kemi believes the most difficult part of being in the house will be being without her phone.

Kemi wants to succeed on the show by making connections but not alliances (though she's open to a showmance). If everyone likes her, she can use that to her advantage to gather knowledge and prepare for any "back-stabbing" she has to do. However, she also has a contingency plan if the first one doesn't work out. She will be fighting to win when it comes to HOH and Veto competitions.

Kemi had an interview with Jeff Schroeder for CBS where she shared her goals going into the house. She knew she was going in solo so she was anticipating leaving solo, too; that meant that any connections she formed could easily be tossed aside for the game. She was looking forward to winning more than anything, so it doesn't seem like Kemi is even entertaining the thought of losing. With one singular outcome in mind, Kemi might be difficult to overcome.

Social media usually offers additional insight into reality TV contestants, but Kemi's personal Instagram account is currently set to private. However, her miniature Dalmatian Billion has his own account where Kemi makes regular appearances. While talking to Jeff, Kemi said that the only thing that might make her emotional in the house was wondering what Billion was getting up to without her. Seeing how cute this doggo is, it's easy to see why Kemi will miss him so much.

Kemi has a strong personality and she'll do whatever she has to do to succeed. Those are two helpful qualities to have when it comes to any reality show competition. She's ready to win Big Brother and it doesn't look like she'll be letting anyone get in her way.