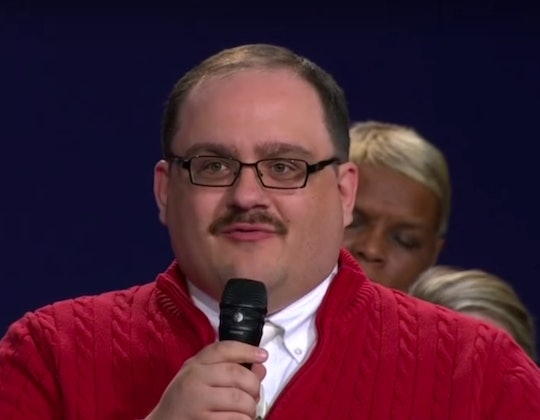 Who Is Ken Bone's Wife? She's His High School Sweetheart

Ken Bone is universally lauded as the best part of the second presidential debate. From his red sweater to his delightfully pragmatic question about energy, Ken won the hearts and minds of the American people. Since his primetime appearance, Ken's earned 175,000 Twitter followers, plenty of interviews, and the admiration of fans everywhere. But when Ken revealed that it was actually the love of his life who made his iconic wardrobe choice for the debate, the internet began to wonder: Who is Ken Bone's wife? It turns out that she's his high school sweetheart.

Ken's wife entered the national conversation when fans learned she picked out the red sweater he rocked on the debate stage. Though Ken initially planned to don a suit, he accidentally ripped his pants and needed a last-minute fix. According to The New York Times, that's when his wife, Heather Bone, stepped in with a sweater she'd initially purchased for him to wear to The Phantom of the Opera. Asked about the sartorial decision, she told The New York Times, "He did kind of stick out among the colors of the audience. And people wanted something fun to look at, with the debate being such a mess." Heather couldn't have known that the red sweater would help propel her husband to internet stardom.

Despite Ken's overnight fame, Heather is mostly staying out of the spotlight. @heatherbone84 on Twitter appears to be her account; she tweeted for the first time Tuesday and earned more than 1,000 followers by Wednesday. In one tweet, Heather posted a photo of her husband "on speaker phone" with the hashtag #startingtomissmyhusband. She also introduced the world to "Ken Bone bear," an adorable teddy bear Ken made her "14 years ago."

It turns out that Ken and Heather Bone both attended Granite City High School, prompting Mashable to ask whether they were high school sweethearts. Delightfully, it appears that they were. In a tweet about Ken Bone, TruTV's Adam Conover wrote, "There is an 85% chance that Ken Bone married his high school sweetheart and just completed his first 5k." Ken responded, "Sweetheart yes, 5k not so much." As if it couldn't get better, Ken and Heather definitely seem to be seriously in love: when BuzzFeed Senior Editor Tanya Chen tweeted "Ken Bone probably has a hot wife," Ken replied, "Yeah he does."

Ken and Heather are both coping with fame they didn't ask for, but they're taking the attention in stride. And even with Americans expressing their digital devotion to him, Ken is always sure to give his wife plenty of credit for his success. In an interview with the St. Louis Post-Dispatch, Ken spoke about his wife's role in debate prep and said, "My wife is the best person I know." Thanks to Ken for restoring the nation's faith in politics and in love.