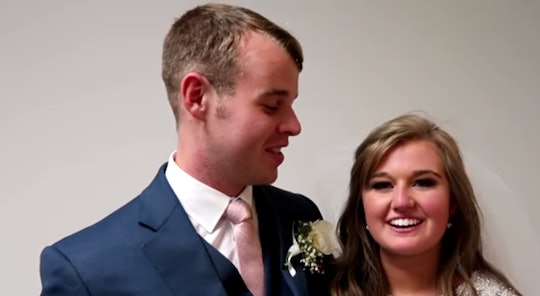 Here's What We Know About Joseph Duggar's Wife, Kendra Duggar

There's one thing for certain about the Duggar family: Their show wouldn't be called Counting On if their brood didn't continue to grow. In September, Joseph became the latest Duggar child to tie the knot, marrying his betrothed, Kendra Caldwell. A month later, Counting On fans began to speculate that the newlyweds are expecting their first child after the couple posted what some considered a suspicious-looking photograph taken during their Grecian honeymoon. But not much is known about Joseph Duggar's new wife, outside of being at the center of pregnancy rumors. So who is Kendra Duggar? Like her husband, the 19-year-old Arkansas native grew up with a strict religious upbringing.

Kendra Duggar is one of seven children raised by Paul and Christina Caldwell in Fayetteville, Arkansas, according to inTouch Weekly. Her father, Paul, is a notable figure in their hometown; he's the pastor at Lighthouse Baptist Church, where the Duggars regularly attend, and former Republican candidate for the Arkansas House of Representatives. He also caused controversy back in 2014, when he passed out offensive flyers door-to-door that reportedly questioned not only God's love of the LGBTQ community, but the community's actual existence, inTouch Weekly reported. (Caldwell told a local news outlet at the time that the flyers were "not intended to offend anyone.")

Some Counting On fans, though, began to express concern in September for Kendra Duggar's well-being and freedom. Many social media users worried Joseph Duggar's wife would be oppressed by her new family's strict religious rules, according to The Stir, after the couple shared a video of their wedding on the official Duggar Facebook page. But that's unlikely to be the case, as Kendra also grew up in a strict religious household that had closely-held Christian beliefs similar to that of the Duggars, who are close family friends to the Caldwells.

In fact, Kendra first met Joseph Duggar through her family's church and began courting in March, according to People. The 23-year-old fifth-generation house flipper popped the question to Kendra at his sister Joy-Anna's wedding in June, telling People at the time,

Our families are close friends through church and this has allowed Kendra and me to get to know each other. She's the best!

The couple exchanged vows four months later, on Sept. 8. Their wedding took place in their home state of Arkansas and was officiated by Kendra's father, Pastor Paul Caldwell, according to US Magazine. Joseph and Kendra Duggar have been together nine months, and married for three.

And there's no doubt, though, that the couple is in love. In an exclusive interview with People last month, Kendra said of her marriage,

One of the most enjoyable things about being married to Joe is just being together so much. I can hug him, kiss him, talk with and be with him all the time. Being with your best friend makes marriage amazing.

Kendra Duggar is also no stranger to the spotlight. She is a frequent guest star on her husband's TLC show, Counting On, along with her sister Lauren, according to inTouch Weekly. (Kendra's other siblings are Micah, Nathan, Timothy, Olivia, and Jesiah.) Coming from a large family herself, helmed by a community figure, Kendra should fit right in with the Duggar's growing clan and their time spent in front of the television cameras.

So what's next for Joseph and Kendra Duggar? As the pregnancy rumors would suggest, Counting On fans can't wait for the couple to announce that they have a bun in the over. And knowing the Duggar family, that wouldn't be entirely surprising. It may not happen in the next few months, but sometime soon.