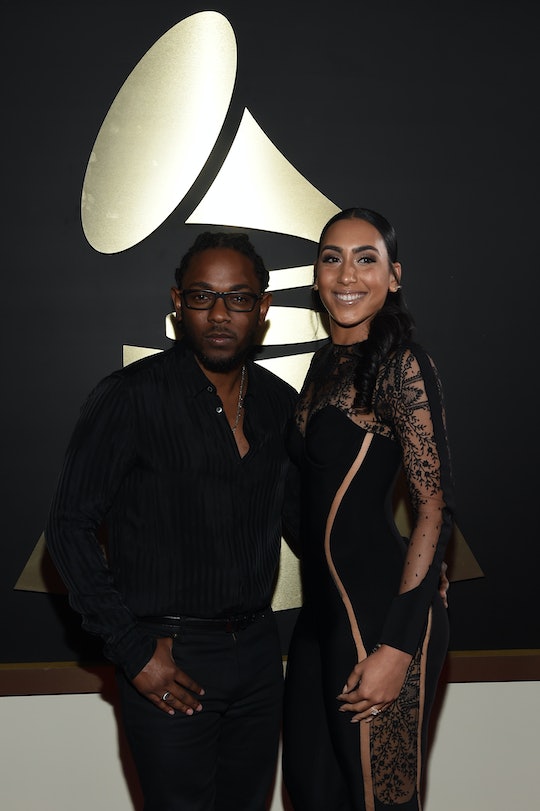 Everything You Need To Know About Kendrick Lamar's Longtime Girlfriend

In spite of Kendrick Lamar being a Grammy award winning rapper, not many people know that much about his personal life. But that doesn't mean that people aren't curious about his persona life. So, certainly someone must be wondering — who is Kendrick Lamar's girlfriend? Because once the Grammy's airs on Sunday night, people will definitely want to know who she is.

Alford and Lamar go way back to a time before Lamar ever set his sights on winning Grammys. Lamar and Kendrick first met while attending high school together as students at Centennial High School in Compton, California in the early 2000's, according to UMusic.

And since then, Alford has been by Lamar's side — from him releasing mixtapes to releasing some mega-hits just a few years later. But, the couple tends to keep their private life, private.

Alford is a makeup artist based in California who goes by Blushed by Whit on Instagram. But she's more than just Lamar's fiancé and long term love. After graduating from high school, Alford graduated from California State University - Long Beach with a degree in Accounting, according to her website. After graduating from college, Alford chose to pursue her love of makeup, becoming a makeup artist and licensed aesthetician.

She has styled Lamar's hair for quite a few performances and photoshoots, according to her Instagram account, which she clearly loves. "He ain't this cute for nothing," Alford captioned one of her photos of Lamar. See? Behind every powerful man is an even stronger woman.

But, Alford isn't one to give interviews about herself or her beau.

In a 2014 New York Times profile, it's noted that the couple is "so at ease" together (Alford reportedly knows how to "sass" Lamar) but, Lamar "tries to keep his relationship with Alford private," according to the New York Times, which is definitely understandable. Lamar only had one thing to say about Alford in this interview — that "she's been here since day one." Awwww.

One year later, in April 2015, during an appearance on NYC's Breakfast Club radio show, Lamar confirmed that he and Alford were engaged, according to Billboard. Although he did not say when he proposed to his long-term girlfriend or how he did it, he did have quite a bit of cute things to say about her. Lamar said, according to Billboard:

I'm loyal to the soil. At the end of the day, you always want to have real people around you, period —whether male or female.

OK, so maybe Lamar is super intent on keeping Alford private. But, you have to respect Alford for wanting to live her life away from the spotlight, especially since her fiancé is always in the spotlight. And Lamar acknowledges this.

In a January 2015 interview with Billboard, Lamar told the magazine that he was so grateful for Alford — and had the cutest things to say about her. Lamar said:

I wouldn't even call her my girl. That's my best friend. I don't even like the term that society has put in the world as far as being a companion — she's somebody I can tell my fears too.

Lamar is clearly a firm believer in love. Not only does he have a hit song called "LOVE" but he told Interview in 2013 that love is the most powerful thing of all. "Love to me is god...It's the ruler of all things, whether it's with a person or with music or with your T.V."

And when Lamar accepted his Grammy for Best Rap Album in 2016, he thanked Alford in his acceptance speech for being there with him, according to Bossip.

"Whitney, I will always love you for supporting me and keeping me motivated to be the best person," Lamar said.

Based on everything Lamar has said about Alford, it sounds like she will keep on supporting him for the rest of their lives. They've already come this far, together.

More Like This
Aww! 2-Year-Old Archie Is "Very Happy" To Be A Big Brother
Doria Ragland Finally Breaks Her Silence In Harry & Meghan
Prince Harry Talks About How He’s Just Like His Mother Princess Diana
'Harry & Meghan' Shares Never-Before-Seen Photos Of Archie & Lilibet