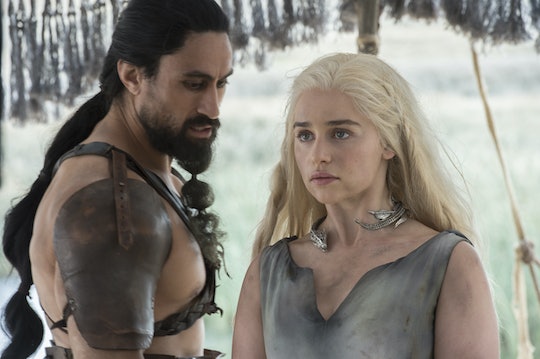 Who Is Khal Moro? 'Game Of Thrones' Season 6 Is Off To A Big Start

Well, that didn't take long. Though Game of Thrones Season 6 began with an ominious look at the fate of Jon Snow and well, just about everyone on the show, there is one sliver of hope left — Khaleesi may very well be in good (OK fine, OKish?) hands. But who is Khal Moro? Game of Thrones Season 6 promised to be packed full of new characters and plenty of exciting new plot lines, but the new Khal is definitely going to be pretty interesting, to say the least.

Prior to the premiere, all the teasers surrounding the mystery khal Dany meets suggest that he's not someone to f*ck with, but teasers can be pretty deceiving. Most of us were preparing for the worst — given the shows incredibly misogynistic viewpoint of women, which often includes rape and abuse as the vehicles for "character growth" — but Khal Moro, at the outset, seems like a fairly level-headed dude. When Dany made clear that she was the wife of the slain Khal Drogo, Moro's entire viewpoint changed. His conversation was stripped of any and all lingering sexual innuendo and he treated her with (dare I say it), the very bottom-of-the-barrel respect. Though he sent Dany off to go where all the other windowed wives of slain Khals live, he at the very least respected that she was a woman who'd pledged her life to the Dothraki.

He's Dothraki, so he's a bit of a brute But he's also quite loyal. He follows traditions very strictly. He's loyal to the living, and he's loyal to the dead as well. He's not as much of a chauvinist as some of the other Dothraki.

Naufahu says that while filming, his hair was down to his butt, a sure indicator of Moro's straight and adoration by his people (Khals do not cut their hair until they've lost in a fight). And when it came time to learn the Dothraki tongue, Naufahu admits the odds were stacked against him. He told Hollywood Reporter:

The biggest part was learning the language. That was tough, man. There's no rules. There were no language rules you can fall back on while filming. You have to remember the sounds. Not only do you have to learn your own [lines], you have to learn the other people's as well. Otherwise, you're just standing there waiting for a reaction. That was the toughest part. I can ride horses; that's all good. I can grow a beard. They can put tattoos on me. In terms of prep, it was just the language.

None of us are exactly sure what will come of Moro this season — and that includes whether or not he'll be a character we love or loathe — but if first impressions are any indicator, I'd say we need to see more of Dany's health and well-being before we make a judgment call.