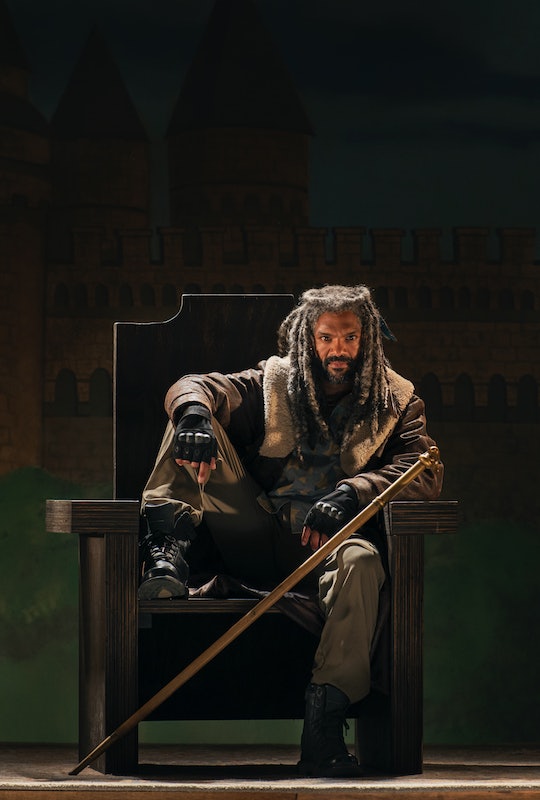 Who Is King Ezekiel On 'The Walking Dead'? Season 7 Introduces A New Character

Season 6 of The Walking Dead left its characters and its audience in a dark place: after weeks of contending with The Saviors, Rick and his crew finally ended up on the wrong end of Negan's famous baseball bat, Lucille. The altercation left one person dead (or more), and certainly seemed to imply that Season 7 would be an even darker, more difficult road than the characters had traversed before. But Negan isn't the only new character joining the cast, and it's not going to be all misery and bloodshed (though there's bound to be a lot of that). In fact, one new character, Ezekiel, might be integral to defeating Negan. But who is Ezekiel on The Walking Dead Season 7?

Ezekiel is the leader of his own community, which is called The Kingdom. And while he didn't make an appearance in Season 6, the finale did feature some of his people: the knightly men on horseback who saved Carol and Morgan in the nick of time. The addition of Morgan and Carol to Ezekiel's narrative seems like a twist on his story in the comics, but it accomplishes the same initial goal: it brings Ezekiel's community into contact with the people of Alexandria, which may allow them to become allies in the battle against Negan.

Ezekiel takes the royalty metaphor pretty far when it comes to his community; he even refers to him as the king. He runs a tight ship in the confines of his walled Kingdom, only allowing in outsiders if they have an escort, but he doesn't rule with fear in the way Negan does. In fact, he's not really like any of the other leaders viewers have met so far, and it's not just because he has a much flashier sense of style.

Ezekiel is distinct in the comics for his theatrics, and for his pet tiger Shiva, supposedly a holdover from his pre-zombie apocalypse life as a zookeeper. Ezekiel's flair and confidence hides some insecurity, but he is able to step up to the plate for his people when he has to. He helps broker the alliances between communities that leads to Negan's downfall, though he suffers extreme losses along the way. He also gets romantically involved with Michonne – which, if it happens on the show, may cause some trouble between her and Rick. Unfortunately, Ezekiel does eventually meet his death in the comics.

According to the actor who plays Ezekiel, Khary Payton, Ezekiel is all about hope. He hasn't let the darkness of the world consume him, and that makes him unique. "He's one of the few people on earth whose joy hasn't been robbed, and to him, that's the difference between the living and the dead," Payton told Entertainment Weekly, adding:

"If you're still human, but you're letting your joy be taken away from you, you might as well be one of those mindless creatures walking all over. So to him, it's kind of a weird philosophy of life that he's developed living in this apocalypse that you don't let this world turn you into something that you're not."

It sounds like Ezekiel will be a welcome presence in the bleak world of The Walking Dead. There's no telling just yet how closely his character will hew to the comics, but considering he still has a tiger, it's looking likely that things will remain fairly similar. However, Morgan and Carol seem primed to become a big part of his story because they're the first to interact with and visit The Kingdom; that could definitely alter the course of things. It makes sense to interject them into Ezekiel's plot because they're both characters who are in need of the redemption and hope that Ezekiel promises. If things go well, maybe one of them might end up won over by the King instead of Michonne.