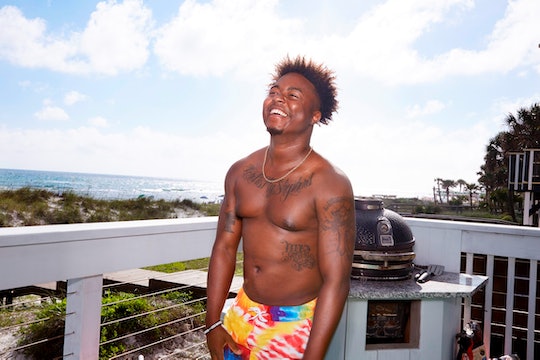 It's been almost 10 years since the Jersey Shore first premiered on MTV and became a cultural phenomenon. Now MTV is trying to recreate that reality TV magic with the new series, Floribama Shore. Yes, that is Floribama, as in Florida plus Alabama. The show is set in the Florida Panhandle along the beach that stretches down to Alabama and will follow eight Southern kids just trying to have a fun summer. One of those kids is Kirk Medas, but who is Kirk from MTV's Floribama Shore?

He's a Panama City Beach local, where the show takes place, but is originally from Atlanta, GA. According to his profile on MTV.com, he values family above all else, which leads to him getting into a number of bar brawls in defense of his new "family," or fellow cast mates. His bestie in the house is Gus, whom he apparently shares a similar past with.

When he's not partying it up on the Shore, Kirk works as a social media manager at Shouty, LLC, which, according to their LinkedIn page, is a live-streaming and content creating company. They're also listed as being an Entertainment company. Outside of that, based on Instagram, it's clear Kirk just loves to have a good time. While he clearly likes to go out to party, he also enjoys hanging out in nature and being there for his mom, who he actually walked down the aisle last year when she got married.

It'll be interesting to see how he gets along in the house and which of the original Jersey Shore cast members he's most similar to. If I had to make a guess right now, I'd say he's a bit of a Ronnie.

Along with Kirk and his partner-in-crime, Gus, there are six other people joining them in Panama City. Those other cast members/house guests include Aimee, Candace, Codi, Jeremiah, Kortni, and Nilsa. Last week, Entertainment Tonight sat down with a few of the cast members ahead of the South Carolina v. Florida Gators football game and discussed what viewers could expect from the show, and it's basically everything you would expect from a Jersey Shore reboot.

The group already has a signature dance move, replacing the fist bump with the dab, which was originally started by football player Cam Newton. They'll also be spending most of their time partying and going out to bars and a "love square" has already formed in the house in the first episode. The sparks will fly between Gus, Kortni, Nilsa, and Jeremiah. It's also worth noting that in his cast bio Gus made it clear he's looking for love and wants to find a woman he can marry. Personally, I think he may be on the wrong reality show for that, but I guess we shall see.

Besides the possible love connections, there will also definitely be some drama and fights. Codi already admitted to ET that he "might be a pot stirrer at times." Despite the inevitable drama, the cast was still able to build some strong friendships and bonds within the house, which you can kind of already tell, based on the cast's social media pages.

Though they're not giving away any specifics about what happens during the season, they have shared pics and videos of hanging out with each other and having a good time.

You can see all the hijinks and drama this new crew of 20-something year olds get into when Floribama Shore premieres Monday night on MTV at 10 p.m. EST.