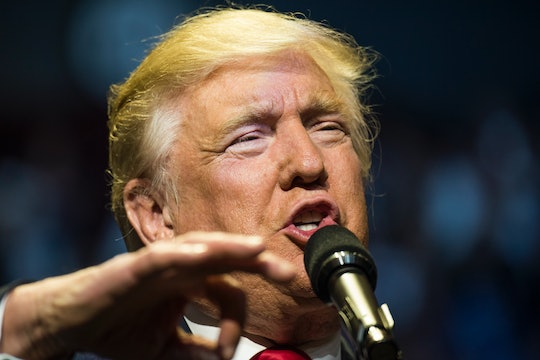 Who Is Kristin Anderson? She Alleges That Donald Trump Sexually Assaulted Her In The 1990s

Another woman is accusing Republican presidential nominee Donald Trump of sexual assault. Who is Kristin Anderson? She alleged that Trump touched her inappropriately in the early 1990s, according to a new Washington Post story on Friday. The Trump campaign did not immediately respond to Romper's request for comment.

Anderson told The Washington Post that she lived in New York "in her early 20s" while trying to become a model. She was at a "Manhattan nightspot" talking with acquaintances. Anderson claims that the person to her right, who she hadn't noticed during her conversation, sexually assaulted her. In the words of Washington Post reporter Karen Tumulty, the individual's "fingers slid under [Anderson's] miniskirt, moved up her inner thigh, and touched her vagina through her underwear." The encounter was over in fewer than 30 seconds, according to Anderson; she "shoved" the person's hand and got up from the couch to see who touched her. Anderson alleged that the individual who assaulted her was Trump. Though the two did not speak, Anderson said he was immediately recognizable: "He was so distinctive looking — with the hair and the eyebrows. I mean, nobody else has those eyebrows." Despite the forward and aggressive nature of Trump's alleged sexual assault, according to Jezebel, Anderson said it didn't seem Trump wanted to take it any further: "It wasn’t a sexual come-on. I don’t know why he did it. It was like just to prove that he could do it, and nothing would happen."

After the incident, Anderson said she and those around her were "very grossed out and weirded out" by Trump's alleged behavior, Politico reported. She said that they registered that "Donald is gross" and decided to "move on." In the years since, Anderson occasionally told friends the story but didn't feel compelled to share her account publicly until now. National political correspondent Tumulty told CNN during a live interview Friday that The Washington Post "got a tip" about what happened to Anderson, but Anderson initially hesitated to go public.

Anderson told The Washington Post that the recently-released footage catching Trump and former Access Hollywood host Billy Bush discussing women on a hot mic upset her, but the sexual assault allegations against Trump reported by The New York Times and People prompted her to tell her own story. Romper has reached out to the Trump campaign for further comment on the other assault allegations against him, and is awaiting a response. Trump vehemently denied the allegations during a campaign stop in West Palm Beach on Thursday, and he has never been charged with any crime.

Anderson now lives in Southern California and works as a photographer, according to The Washington Post. Her decision to come forward with allegations against Trump propelled her into the national spotlight, but she told Tumulty that speaking out was important:

It’s a sexual assault issue, and it’s something that I’ve kept quiet on my own. And I’ve always kept quiet. And why should I keep quiet? Actually, all of the women should speak up, and if you’re touched inappropriately, tell somebody and speak up about it. Actually go to the authorities and press some charges. It’s not okay.

Though the attention brought by going public may be unwanted, Anderson chose to make her story known out of respect for other women who may have found themselves in similar circumstances. As Tumulty told CNN, "The Washington Post went to her, she did not come to us."