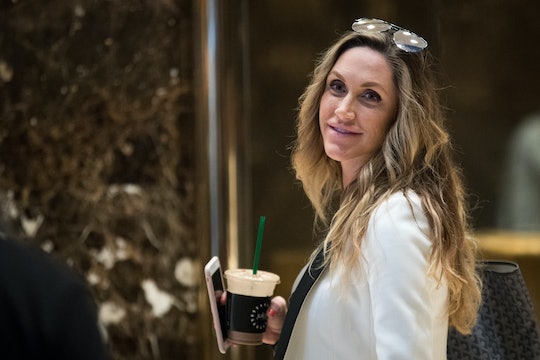 A former Inside Edition producer is feuding with a former Celebrity Big Brother contestant, and because it's 2018, this is actually political news, not entertainment. President Donald Trump's daughter-in-law, Lara Trump, was called out by Omarosa Manigault-Newman on Thursday, and accused of trying to bribe her with a job on Trump's 2020 reelection campaign in exchange for her silent.

On Monday, Lara, wife of Eric Trump (the fidget spinner guy from Weekend Update) appeared on Fox News to rail against Manigault-Newman's new tell-all book, Unhinged: An Insider's Account of the Trump White House. "I'm incredibly disappointed in her, and more than anything, I'm just so sad, because what an incredible opportunity she wasted," Lara told host Sean Hannity, according to Newsweek. "The president gave her the chance to make a difference, to take care of people that she claimed to care about, and here she has squandered it for this fictitious, ridiculous book." In addition to being family, Lara also functions as her father-in-law's de facto campaign manager, making Tiffany and Barron the only relatives that the president has yet to install in the White House.

During a Thursday appearance on MSNBC, Manigault-Newman played an audio recording allegedly of Lara offering her a job. She claims that the conversation took place in December 2017, shortly after she left her position at the White House. It's the fourth secret recording that Manigault-Newman has released in order to back up the allegations in her book, in which she appears to portray the president as a racist with failing mental faculties.

On the recording, per NBC News, Lara can allegedly be heard saying, "It sounds a little like, obviously, that there are some things you've got in the back pocket to pull out. Clearly, if you come on board the campaign, like, we can't have, we got to —" Manigault-Newman then interjects, "Oh, God, no." Trump then allegedly stressed, "Everything, everybody, positive, right?" In another excerpt, Trump can allegedly be heard discussing a potential salary, noting that one area of concern is that "everything is public." "I know you, you were making 179 at the White House," the voice that Manigualt-Newman claims is Trump continued. "We were talking about, like, 15K a month ... So that's $180,000. Does that sound like a fair deal for you?" Lara called the recording a "fraud," according to The Hill, not because she denies the veracity of the content, but because she claims the conversation took place over the course of several weeks, rather than in one sitting.

Manigault-Newman told MSNBC's Craig Melvin that she was asked to sign a nondisclosure agreement, but refused. She said that the recording proves the Trump campaign's attempt "to buy my silence, to censor me, and to pay me off." Asked if she would characterize the $180 as "hush money," Manigault Newman responded, "Absolutely." She also said that she'd witnessed "corruption" at the White House, the details of which she'd share "when the time is right," along with the release of more audio tapes, "if I need to." She also confirmed that she'd been interviewed by special counsel Robert Mueller's team in connection with the Russia investigation.

Before taking up with the Trump campaign, Lara worked as a personal trainer, a pastry chef, a TV producer, and most recently, a chairperson on the board of her husband's now-defunct Eric Trump Foundation, an organization that purported to be a non-profit aimed at raising money for St. Jude Children's Research Hospital through events such as an annual golf tournament that sounds more like a Stefan fever dream than a gala for wealthy donors. This place had everything, according to Forbes: cigars, Hooters girls, Darryl Strawberry, felonious housewives, 20 percent of Twisted Sister, and a disgraced Aflac duck. After that publication reported in June 2017 that the proceeds of Westchester's hottest fundraiser were being funneled into other charities (and "charities"), the New York attorney general's office opened an investigation which is still ongoing, according to the Associated Press.

Currently, in addition to being the face of the Trump campaign, Lara hosts "Real News Update," a weekly series of propaganda videos framed as a news program that's broadcast exclusively on social media. It's like Russia Today or Korean Central TV, only without a broadcasting license. Lara issued a statement following the release of Manigault-Newman's latest recording, saying, "Woman to woman, I shared a connection with Omarosa as a friend and a campaign sister, and I am absolutely shocked and saddened by her betrayal and violation on a deeply personal level. I hope it's all worth it for you, Omarosa, because some things you just can't put a price on." Awkward.