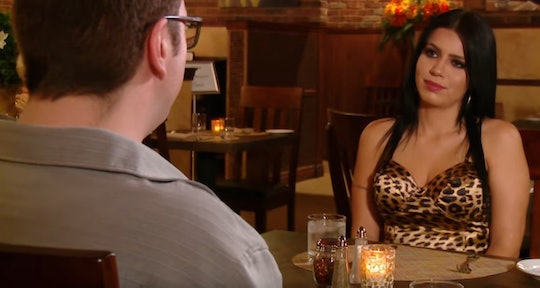 Larissa Has A New Boyfriend On '90 Day Fiance: Happily Ever After?'

From new babies to bitter divorce, Season 4 of 90 Day Fiancé: Happily Ever After? has been an emotional roller coaster ride. Larissa and Colt were one of the most popular couples of the franchise, but their marriage is ending with this season. In the new reunion episode, as the two are in the midst of divorce, there’s a new man in Larissa’s corner. After seeing his love for her in the Tell All, fans want to know who Larissa’s new boyfriend is.

When celebrating her divorce in Las Vegas, Larissa told E!, that she met her new beaux Eric Nichols on a dating app. “I met him on Tinder, he’s really sweet,” she gushed. “He’s 26-years-old — he’s really special to me.” She also noted that one of the best qualities she sees in Eric is that he’s nothing like her ex. “I like that he’s completely the opposite of Colt,” Larissa added. “He’s independent, he takes care of himself. So he’s not a momma’s boy.”

During the same divorce party, E! spoke to Eric, and asked him what he likes about Larissa. “Her scent...it’s very breathtaking,” he told the outlet. “[I like] her personality, her accent.” Eric also revealed that he never really watched 90 Day Fiancé, so he didn’t know who Larissa was when he met her. When asked about how he compares to Colt, Eric said he’d rather focus on his relationship with Larissa than to mull over her past. “I can see a few little differences between him and I,” said Eric. “But that’s not to say that he’s a bad guy whatsoever. I don’t know exactly what may have happened between the two of them, but for me, what’s going on with her and I? it’s very good — She makes me happy”

Eric doesn’t have much of an internet presence, and his social media pages are set to private, so it’s not clear what he does for a living. But Larissa does share plenty of pictures of him on her Instagram page, and in a Q & A on her IG story last month, she mentioned that Eric is a salesman with flexible hours, who can cook and fix just about anything. She recently shared a photo of the two celebrating their six-month anniversary, and posted a video of them dancing together on a boat.

After seeing how miserable Larissa was with Colt, it’s nice to see her in a happier place. The two went through a number of ups and downs since their first season of 90 Day Fiancé, but recently things started to get violent — leading to arrests and assault charges against Larissa. On her Instagram feed, Larissa said that she hasn’t been in touch with Colt or his mother Debbie since the divorce, and when asked about rumors that Colt is dating someone, Larissa’s response was, “Happy, life goes on.”

This shows that the two are finally moving on, and I think that’s a good thing. With their new lives and relationships ahead of them, both Colt and Larissa should look to a healthier future, and finally leave behind the negativity of their past.