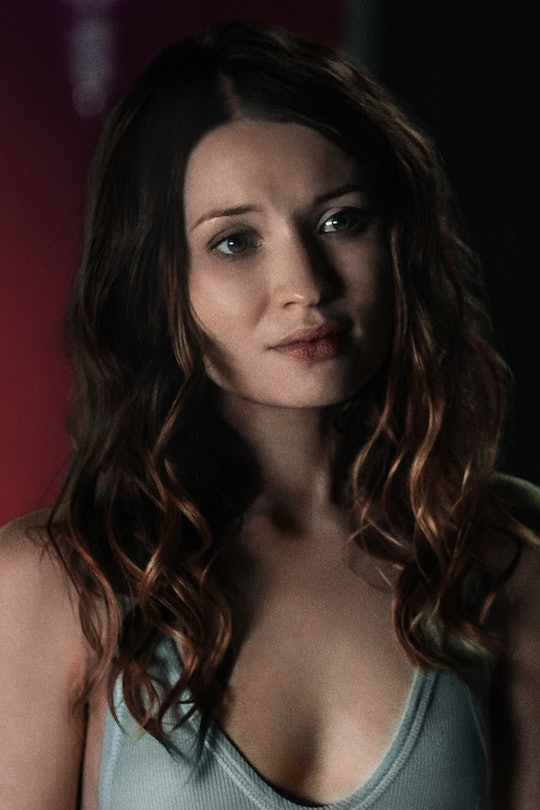 There are plenty of enigmatic and memorable characters on Starz's new series American Gods, which, unsurprisingly, has a whole bunch of characters in it who are deities. But one of the very few non-godly characters on the show is also one of the most compelling — and that's our main character Shadow Moon's wife, Laura. When fans first meet Laura on the first episode, she most likely has seen better days (to put it mildly). But if show-Laura is anything like book-Laura, she'll soon become an integral part of Shadow's journey. So exactly who is Laura Moon on American Gods, and what's her deal?

Laura is played by Emily Browning, best known for her film roles in movies including Lemony Snicket's A Series of Unfortunate Events, The Uninvited, and Sucker Punch. In many ways, Laura is the lynchpin, the character who sets the entire events of the story in action. She's Shadow's beloved wife, one who he's idealized in his mind but who actually had a dark secret — prior to her death in a car accident. It's Laura's untimely death (just days before Shadow was due out of prison after a years-long sentence), that inadvertently propels him on his journey.

Normally, that would sound like a textbook case of fridging, an all-too-common trope where an underdeveloped character (typically female) is killed off to cause the hero of the story anguish and spur them on in their own development. The only difference, here, is that Laura doesn't stay dead for very long.

Thanks to a mysterious gold coin that Shadow procures from a leprechaun and leaves for his late wife on her freshly dug grave, Laura returns to the land of the living — sort of. She's not *technically* alive, but she is conscious and able to interact with (and, weirdly, to track) her husband, despite the fact that she's still actively decomposing. Warning: spoilers from the novel ahead!

In the book, Laura becomes a surprisingly important part of the story, rescuing Shadow from the New Gods' henchmen and even participating in the climactic battle sequence. Her story wraps up in a satisfyingly cathartic way. Despite the fact that she's important in the original story, she's not seen consistently throughout, only making sporadic appearances (though longer and more meaningful ones toward's the novel's end). Luckily, the expansion of her character for the series is something that showrunner Bryan Fuller has been more than eager to talk about ahead of the show's release.

"If you think you know Laura Moon from the book, you don't know Laura Moon," Fuller told CNET in an interview about the new series. "The show is very faithful to the book, but it also takes a lot of liberties — liberties that have been sanctioned by Neil [Gaiman]." Calling her a "quote unquote 'unlikable' character," Fuller also confirmed that they'd dedicated the entire fourth episode of the eight-episode season to her character, something that will likely flesh Laura out substantially (pun so intended for Shadow's corpse bride).

One of the most interesting things about Laura is that, despite Shadow's feelings about and reverence of her, she's not actually a very good person. "Laura’s kind of awful. I mean, she’s not a nice person but who the f*** wants to be a nice person? 'Nice' is the worst possible word," Browning told Evening Standard. "Like, be a kind person [...] Laura’s not even a kind person."

The TV world could always use another complex, female antihero, so I look forward to seeing how this all plays out.