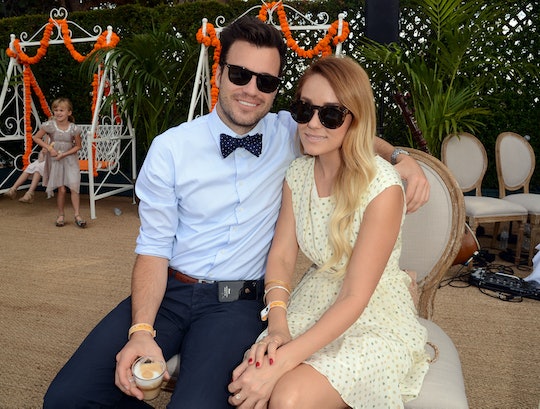 Here's Everything To Know About Lauren Conrad's Rockstar Husband

The stars of The Hills have come a long way since high school. They've grown up, started companies, gotten married, and had kids. The most recent The Hills alum to announce a pregnancy is Lauren Conrad, who is expecting her second child with William Tell according to People. The news has left fans with questions about her relationship, specifically who is Lauren Conrad's husband?

Conrad and Tell first met when she was 16, according to a post on her blog. At the time, he was in the band Something Corporate. Conrad said she attended one of his shows, but sparks didn't fly for the pair until years later. The couple was set up on a blind date, she revealed in the same post, and the rest was history.

"I met my husband when I was 16 and sitting onstage at one of his concerts," Conrad recalled. "10 years later we were set up on a blind date."

The date took place on Valentine's Day in 2014. Conrad shared on her blog that two unnamed mutual friends set it up for her and Tell. The date went well, and months later the pair were living together. Now, they're married and are about to be parents to two children.

The former reality TV personality announced that she was pregnant with her first child in January 2017, according to Closer. She shared the news on Instagram, wishing followers well in the new year. She added that she had "a feeling 2017 is going to be the best year yet..." The post included a sonogram photo of her first baby.

Her first baby, a boy, was born in July 2017, according to PEOPLE. She opened up about the insane night she went into labor, revealing that she started contracting shortly after her guests left a Fourth of July party she and Tell through. Conrad told PEOPLE she and her husband had been talking about the baby arriving, and were certain he would hold off until after the party.

"Two days before, I said to William, I don't think he's coming before," she said, according to PEOPLE. "I said, I think I'm going to be fine. I really would like to have a Fourth of July party. It's my favorite day of the year. I love Fourth of July. I have this party every year."

Conrad made it through the party, but not long after her son Liam James was on his way. She told PEOPLE that after the party she headed to bed without her husband. He followed after, and the moment he laid his head down, her water broke.

"I felt so bad because it was such a long day," she recalled. "William came in an hour later, and as soon as his head hit the pillow, my water broke."

Liam was born on July 5, 2017. On April 2, Conrad announced that she and Tell were expecting their second child together. She shared the news on Instagram, posting a photo of her cradling her growing baby bump on Instagram. In the caption, she said their "family will be getting a little bigger this year."

Conrad and Tell's love story is straight out of a story book. Since getting together, the couple has created an adorable little family and fans can't get enough. Although it's only been public that Conrad is pregnant for about a month, everyone is already looking forward to meeting her next little bundle of joy.