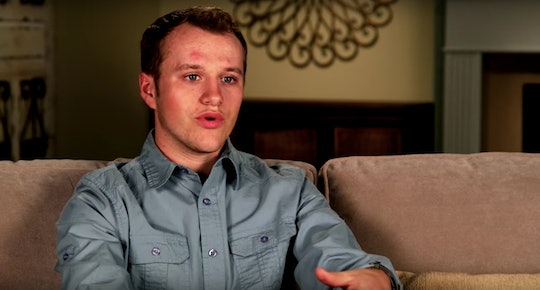 There's a lot to keep up with when it comes to the Duggars, and all their marriages, pregnancies, and courtships. And following today's news that another Duggar, Josiah Duggar, has officially entered into a new courtship, fans are all wondering one thing: Who exactly is Lauren Swanson and how did she and the 21-year-old Duggar meet.

That's right, folks! There's a lot happening in the Duggar family and after weeks of speculation and rumors, Duggar has officially announced that he is courting 18-year-old Swanson. In a statement to People, the couple announced that they are taking their friendship to a new level:

We are overjoyed to begin this new phase of our lives together. Through the years our families’ friendship has allowed us to get to know one another as friends. I can definitely say I have found a great friend … even better than I could have hoped for or imagined.

So, now that everyone knows Duggar's relationship with Swanson is officially official, many are wondering who exactly she is and want to know basically everything about her. Which, honestly, is kind of understandable. After all, she's now linked to one of the most famous families out there. With that said, here's what we know.

If you're a fan of the Duggars or have ever watched any one of the family's shows, 19 Kids and Counting or Counting On, then you know that they have some pretty strict rules regarding just about everything. But something they're known to be especially stringent on is their rules about dating.

One of the family's rules is that their kids shouldn't be on social media until they're engaged, according to TODAY. Obviously, Duggar isn't engaged, yet he has an Instagram page, so he might be a bit of a rebel. Swanson, though, doesn't appear to have an Instagram. And considering People's report that Swanson's family and the Duggars are friends, it wouldn't be too surprising that she also chose to abide by those same strict rules.

In a video released from TLC, Duggar and Swanson can be seen standing next to each other and telling the story of their decision to move into a courtship. "I came up behind her at a meal while she was hanging out with some of my siblings and surprised her," Duggar explained, going on to say that he then asked her straight up, "You wanna move to the next level, from friendship to courtship?"

And you know what Swanson said next. Truthfully, the fact that Swanson is already close with Duggar's family is a great sign. Meeting the family is often a stressful step for couples, but since Duggar and Swanson have already done just that, they can focus this time on each other.

Recently, Duggar had started hanging out with Swanson's family and really getting to know their dynamic and how similar they are to his own. "They really are very similar to [my] family and have all the same goals," he said in the video from TLC. "That’s really when I knew I would like to move this further from just a friendship and actually start a courtship."

Swanson also explained in the video that they were focused on "putting God first and ourselves second," indicating that she and Duggar have definitely already agreed about how important faith will be in their relationship. Additionally, Swanson and Duggar have a lot in common when it comes to their families. People reported that Swanson is one of eight children, so she definitely can relate to Duggar in that aspect.

A new Duggar courtship is always exciting and hopefully these two will keep fans up to date on this special time in their lives.