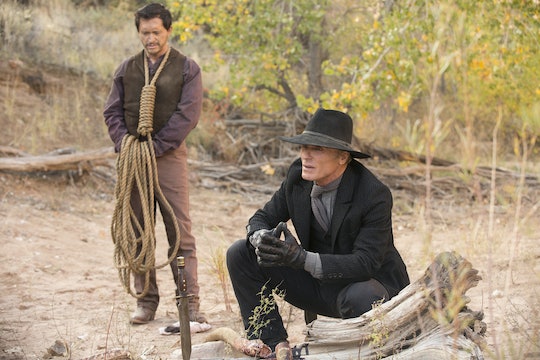 Who Is Lawrence On 'Westworld'? The Man In Black Needs Him For Something

With each passing episode of Westworld, it's as if we get a new piece of the puzzle. But the puzzle only continues to get bigger and bigger. From the start of the show, we met the Man in Black, who was portrayed as the villain. That continues to be the case, but on last Sunday's episode "Dissonance Theory," it was made clear that there's much more to him than meets the eye. In fact, no one is really who they seem to be in this place and the same could be said for Lawrence, who the Man in Black has been dragging around for the past few episodes for reasons not yet known. So who really is Lawrence on Westworld and is there more to him than we thought?

When we first met Lawrence he was about to be hanged for his crimes, however, the Man in Black "saved" him in the hopes of using him to find the maze. The Man in Black dragged Lawrence back to his hometown where they found his wife and daughter. He demanded to know the next clue to the maze, but Lawrence claimed ignorance, causing the Man in Black to kill Lawrence's wife and then threaten to do the same to his daughter. Of course, we know the hosts don't technically get killed (since they presumably aren't alive to begin with). But as a host himself, Lawrence didn't know that, so the threat felt pretty real. Still, despite the possibility of his daughter dying, Lawrence continued to claim he didn't know anything about the maze. Finally his daughter, who is apparently more knowledgable about the park than she originally let on, gave the Man in Black the next clue he was looking for. ""Follow the blood arroyo to where the snake lays its eggs," she told him.

From there, the Man in Black continued to drag Lawrence along and later saved him once again from being killed for his crimes. It kinda makes you wonder why the Man in Black didn't just kill Lawerence after his daughter gave him what he needed. The Man in Black hasn't been very kind in his dealings with the hosts and has, in fact, been pretty vicious and cruel. If he's keeping Lawerence alive, he must be doing so for some purpose, but what that is remains unclear. Maybe Lawerence himself is another key to the maze and the Man in Black knows it.

Whatever the case may be, there has to be more to Lawerence than what has been revealed. Hopefully we'll continue to get more answers as the season progresses.