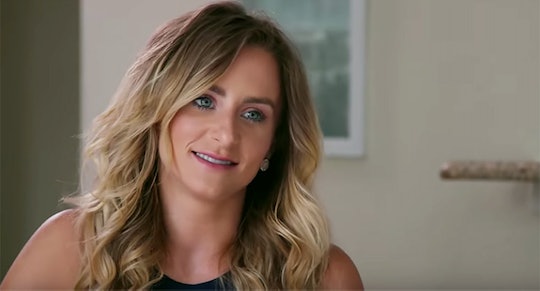 Teen Mom 2 star Leah Messer has two divorces under her belt and three kids, so she doesn't want to date just for the sake of dating. Leah's careful approach to love has paid off, and she's currently in a successful relationship. So, who's Leah's new boyfriend?

For a second there, Leah was considering getting back together with her second husband, Jeremy Calvert. Jeremy is the father of Leah's youngest daughter, Addie, and he's often away from home due to his job as a pipeline engineer.

I was admittedly meh about the idea because Jeremy hasn't always treated Leah well, like the time he revealed on-camera that he regretted having a child with her. But to my relief and some others, Leah ultimately decided against the idea.

"I guess at first maybe I considered [getting back together with Jeremy]," Leah said in June 2018, according to Pop Culture. "Like, 'If we are getting along this great, why not try it again for Addie's sake?' But at the end of the day, we weren't happy. We didn't do well together but we do great as friends."

Once Leah got over Jeremy for good, she met her now-boyfriend, 40-year-old Jason Jordan, through a mutual friend in spring 2018. The two are a great match because they both have kids (Jason has a young son named Rylan), and they share similar goals.

"They share the same faith and have gone to church together. They love hiking, cooking and are both very family oriented," a source told Us Weekly. "He’s very attentive.”

Arguably the best part about the pair's romance is their 14-year age difference. Although that might be off-putting to some people (different strokes for different folks , right?) it works for Leah because she needs someone who understands her lifestyle.

If I date someone my age, they don't get my life," she said in the TM2 Season 9 trailer. "They don't understand three kids. They don't want any part of that, actually."

Leah also gave Jason a shoutout for his job, noting that he enjoys a stable career in sales.

Despite their seemingly perfect relationship, the two broke up in October 2018 for a brief spell before reuniting in November.

“It just wasn’t working,” an insider revealed to Us Weekly about the breakup. “They’re just not a good fit.”

Color me confused. Are these two compatible or not?

Contradictions aside, it looks like these two are in it for the long haul. Leah posts about Jason non-stop, and she gave him a sweet shoutout on New Year's Eve.

"Wouldn’t have brought the new year in any other way than with my baeee @raylansdad416!" she wrote.

Jason is as equally smitten with Leah. He wrote on Instagram:

I know we aren’t perfect people and we’ve made our fair share of mistakes, but the two of us knowing we aren’t perfect and accepting that imperfection makes us perfect for each other. I love our blended family and our kids mean the world to me! I can’t wait to see what your future has in store.

As for whether the two are headed towards an engagement? Viewers will have to tune in to Season 9 of TM2 to find out.