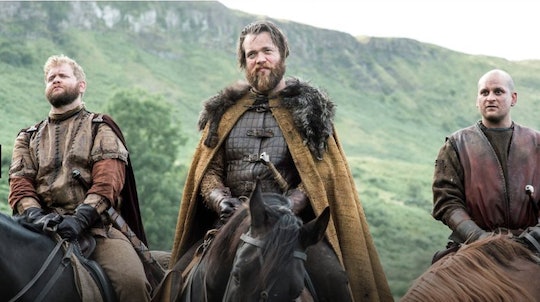 Who Is Lem Lemoncloak On 'Game Of Thrones'? He May Play A Big Role

On Sunday night's episode of Game of Thrones, fans finally saw the return of Sandor Clegane, also know as the Hound. Since being presumed dead, the Hound was hanging with Brother Ray, a pacifist who leads a quite happy group of peaceful people. That is until the Brotherhood Without Banners shows up. The trio antagonized Brother Ray and the group, but Brother Ray didn't act. Later, when the Hound returns to the camp he discovers that everyone has been slaughtered and Brother Ray is hanged, presumably by the Brotherhood. The Hound then picks up his axe and seems to go off looking for revenge.

The last time we saw the Brotherhood was back in Season 3 when they capture Arya, Hot Pie, Gendry, and the Hound. Once the Brotherhood let Melisandre take Gendry, Arya left the group and that was the last we saw of the Brotherhood, until now. Leading the trio that attacked Brother Ray and his camp was a character that has now been confirmed to be Lem Lemoncloak, known for his hooded yellow cloak and bushy beard.

In the Game of Thrones books, Lem was a part of the group that discovered Arya, Gendry, and Hot Pie, however this is the first time we're seeing him on the show. Lem, in the books, is also a follower of the Lord of Light, just as Lord Beric, leader of the Brotherhood Without Banners is, and he helps in the hanging of Petyr, Walder Frey's brother, and Merrett, Walder Frey's son, after the Red Wedding.

However, what makes Lem such an essential and interesting character is he remains a part of the Brotherhood after Lady Stoneheart, the resurrected Catelyn Stark, takes command. This connection to Lady Stoneheart has now made Game of Thrones fans even more certain that Lady Stoneheart will appear on the show soon. Although Jóhannes Haukar, who plays Lem, isn't confirming it he's also not denying it either.

Unfortunately we'll just have to wait and see what the addition of Lem on the show will mean for Lady Stoneheart. Although it would be great to see her return, it may not be good for the Hound. Lady Stoneheart is out for revenge against anyone that hurt her family, and although the Hound has been pretty good to both Sansa and Arya, he still served Joffrey back in the day, and Lady Stoneheart won't be quick to forget that. As the saying goes, the North remembers.