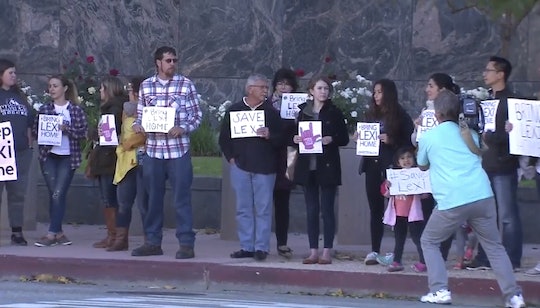 Who Is Lexi's Biological Father? Jay Ellerfobes Wants His Daughter Placed With Family

On Monday, a 6-year-old child was removed from her California foster home, after living there for more than four years. She wasn't removed because she was being treated poorly or was "endangered." According to most sources, the girl seemed happy with Rusty and Summer Page, her foster parents, and their three other children. Instead, child services removed Alexandria from the Page's care, in part because of her Native American ancestry. "Lexi", as she is known by the Pages, is 1.56 percent Choctaw Native American, to be precise. By law, this means Lexi's home placement is protected by the Indian Child Welfare Act of 1978, and Lexi’s biological father and extended family are looking to use that law in their favor to get her back. But who is Lexi's biological father?

According to The Daily Mail, Alexandria's father is Jay Ellerfobes, and while he hasn't said much about himself or Lexi's mother, there's still a decent amount of information out there on both parents thanks to public court documents. Both of Lexi's parents struggled with substance abuse. Her biological mother abandoned the family shortly after Lexi's birth, according to Indian Country Today. And while Lexi's biological father, Ellerfobes, was raising her alone, he was arrested for selling stolen car parts in 2010, when Lexi was just a year old (at which point Lexi entered the foster care system.) Ellerfobes was released from prison in December 2011, at which point he began working on plan to be reunited with her. That was five years ago, when Lexi was two — and shortly after she was placed with the Pages.

The Choctaw Nation has claimed that the Pages knew the plan to place Lexi with her Indian all along:

The Pages were always aware that the goal was to place Lexi with her family, and her permanent placement has been delayed due to the Pages' opposition to the Indian Child Welfare Act...[w]e believe that following the Choctaw Nation's values is in Lexi's best interest.

However after years of fighting and setbacks from the legal system, it seemed Lexi had slowly become a permanent member of the Page family. (In order to reunite with his daughter, Ellerfobe's had to complete a "case plan," which involved drug testing, taking parenting classes, and getting a job. However, some of the required classes were only offered during his work hours, and he subsequently missed a drug test, which is automatically marked as a positive, according to Indian Country Today.) At that point, facing a number of legal setback's Lexi's father and the family attorney decided to exercise Ellerfobe's parental "preferred placement" and requested she be placed with his extended family, until everything could be sorted.

Meanwhile, the Page's decided to take action as well, pressing the courts in order to formally adopt little Lexi into their family. That ongoing court battle finally reached a tipping point this week, when the courts decided against their numerous adoption appeals over the past few years.

According to NBC, the Los Angeles County Department of Children and Family Services (LA DCFS) decided this month that Lexi should be placed with her Utah family, who have been Skyping and visiting her monthly for the past few years, "in accordance with the federal Indian Child Welfare Act", which governs jurisdiction over the removal of Native American children from their families. This week, the court officially removed 6-year-old Lexi from the Page's home.

It's been a confusing case since the beginning. Sometimes, it seems like the law just doesn't make sense. One can only hope at this point that the Pages, Ellerfobe, and her entire extended family are able to work together — somehow — in the best interest of Lexi and all parties involved.