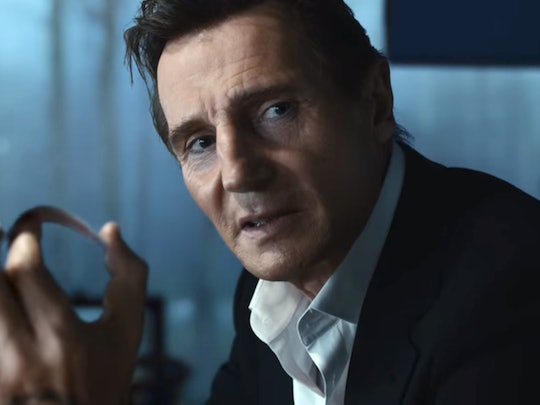 Who Is Liam Neeson Supposed To Be In LG's Super Bowl Ad? It's Quite The Storyline

The Super Bowl is coming, and with it a great excuse to drink gallons of beer, eat pounds of chicken wings, and watch multi-million dollar commercials. Anyone who watches the Super Bowl 50 commercials will likely see a few unsurprisingly sexist moments, as well as some cute puppies or giant ponies selling beer, and maybe even a surprise appearance by an actor people never would have imagined would do something like a Super Bowl commercial. It looks as though that last one's already accounted for, because thanks to the magic of the internet, viewers are getting an early look at a new LG Super Bowl ad starring Liam Neeson, and it's a very complex and futuristic plot. So who is Liam Neeson in LG's Super Bowl ad? It's quite the confusing story line.

First, the credentials: This ad, for the G6 OLED TV, is LG's first foray into commercials during the big game, according to The Verge. Not only is it helmed by a bonafide star, the behind-the-scenes credits are pretty impressive, as well: It was executive-produced by Ridley Scott, who's known for sci-fi juggernauts Alien and Blade Runner. The ad was directed by Ridley's son, Jake Scott, who has previous Super Bowl ad experience, according to AdWeek. The end result, "Man From the Future", is a strange mash-up of The Matrix, Terminator, and Tron.

In the ad, Liam Neeson, seated at a bar, strikes up a conversation with a young man. And by "strikes up a conversation," I mean that he suddenly proclaims "There is a revolution coming," seemingly to no one in particular, while fiddling with a deck of cards. But the bartender ignores him, and the young man replies, so it looks like the weird statement was meant for him. Neeson begins to tell the younger man about protecting the future and repeatedly mentions "a perfect picture on glass", before throwing a playing card at a window. At that point, a magic dragon picture that matches the tattoo on his hand appears on the card's back.

Neeson's character warns the younger man that "they" will come after him, because of "future" reasons, and suddenly the young man is running through a maze with a glowing briefcase. Then, he's on a Lightcycle — I mean motorcycle — trying to escape the mysterious "they." Then he's holding a TV. Then he's back in the bar, just as confused as the rest of us.

"Who are you?" he asks Neeson. "Oh, come now, I've already told you," says the elder. "The future is staring back at you." (Why are you being so mysterious, Liam Neeson?) It's at this point that the younger man's left hand is revealed: he has the same dragon tattoo as Neeson. Ohhh, so it's him, from the future! (Another clue: the young man is played by Neeson's son, Micheál, according to the Wall Street Journal.)

But why didn't he question some weird old guy having the exact same hand tattoo as him? Who are "they"? What do they have against TVs? And why is this Neeson Junior's problem, anyway?

I've watched this ad eight times, and I still can't make sense of it, but it's definitely a good one regardless. Send beer and chicken wings, please, because I'm going to need a few more viewings to figure it all out.