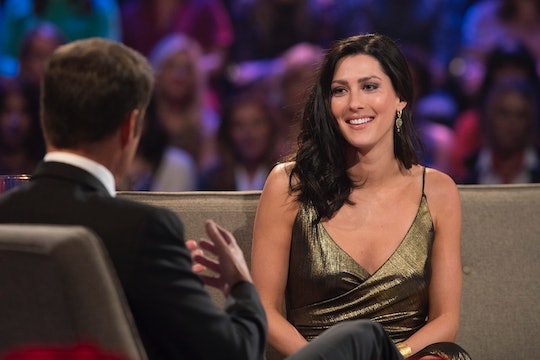 With Tuesday's After the Final Rose, Arie's season is officially over and Bachelor Nation has Becca's Bachelorette season to look forward to. But she got the chance to meet some of her contestants early at the very end of the ATFR special. And if there was one contestant who truly stood out, it was Lincoln. So who is Lincoln from The Bachelorette? The contestant made a great first impression and I'm sure viewers already can't wait for the May 28 premiere date.

Last year, Chris Harrison trotted out contestants from Rachel Lindsays’ season on Nick Viall’s After the Final Rose, and they followed suit this season. Lincoln was the first one up and viewers were immediately intrigued by his accent. He's English, and won all of our hearts by saying "Arie is a wanker." It was also his birthday today, to which Becca replied that they should pop some champagne. The two already seem to have chemistry, but I know I'm getting ahead of myself.... her season hasn't even begun filming yet.

As of now, there's not a lot known about Lincoln online (though by tomorrow I'm sure Bachelor Nation will snoop out all the deets). Rest assured, though, ABC will put up an online biography with his hometown, profession, and age soon enough. Until then, we are left with a delightful gif of the best moment of the night:

This became a theme among the men Becca met: they all slammed Arie and said that Becca will have a much better time with them. Next up was Chase, who told Becca "When one door closes, another door opens." Arie broke the door of its hinges, buddy, but OK. Then came someone I'm sure will be another fan favorite like Lincoln: Ryan. This guy gives off serious Bachelorette James Taylor vibes (no, not that James Taylor). He came on stage wearing a floral jacket and playing a banjo, so he's definitely one to watch.

After Ryan's soulful banjo playing was Darius, who "apologized" to Becca "on behalf of his gender." That was kind and a bit funny, so I'm excited to see if Darius goes far in the competition. Finally, there was Bradley. A horse. Oh, and Blake, his owner. He made a joke about "getting back on the horse," which, after five hours of Bachelor content this week alone and two proposals, made me laugh in my delirium.

None of the men made a bad first impression (like Dean did with the "ready to go black comment"...remember that!?), but it seemed that Lincoln got fans on Twitter talking the most:

I'm certainly there in the #LincolnHive with them already. Two men that Rachel met came in third and fourth place, respectively: Eric and Dean. That means that there is definitely a chance that Lincoln, and another contestant, can make it far in the competition. Last year, Rachel's season of The Bachelorette began filming on March 16; I assume it's a similar schedule for Becca, so she'll meet these men in the actual mansion soon enough.

For now, though, I'm sure Reddit fans and Reality Steve are already working to find out every bit of information on these men as they can. After Arie's eventful season (well, eventful finale anyway), I think I'm going to take a break from bachelor Nation... for probably a few days. Then I'll be ready to see Becca fall in love — actually fall in love this time — and get the engagement she deserves. From the men already shown, I know there will be a lot of potential suitors (and hopefully no Whabooms). How much longer until May 28?