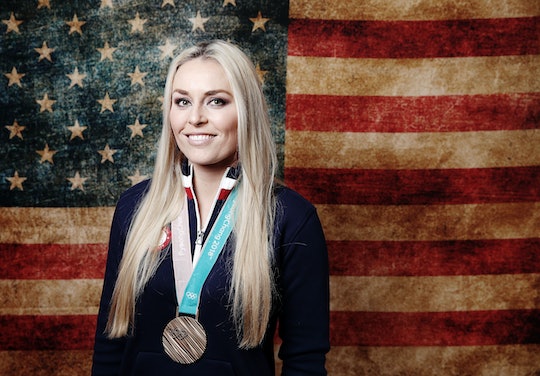 Who Is Lindsey Vonn's Coach? It Takes A Village To Make A Champion

If a student is only as good as their teacher, some might wonder who helped the winningest female alpine ski racer in history get to where she is today. Who is Lindsey Vonn's coach? It may not come as a surprise that it actually took quite a few people to mold her into a champion. Like most Olympic athletes, Vonn started her sport as a toddler. Her grandfather, Don Kildow, founded his local ski club, according to Bleacher Report, and her father, Alan Kildow, is a former junior national ski champion. Growing up in Minnesota, Vonn trained with her dad's former coach, 2005 U.S. National Ski and Snowboard Hall of Fame inductee Erich Sailer, before moving to Vail, Colorado, to start competing.

These days, she has a whole team to train her, including head coach Chris Knight, fitness coach Alex Bunt, and speed coach Alex Hoedlmoser, according to Sports Illustrated. In addition to coaching Vonn, Knight also serves as assistant coach the women's speed team, according to the U.S. Ski and Snowboard Association. The New Zealand native doesn't take credit for his trainee's success, however. "LV's knowledge of her sport is incredible," he told USSA. "She knows what she needs to achieve every training day and how to go about it."

USSA does point out that Knight has been with her during "the most impressive two seasons of her ski racing career," during which she came back from injuries to achieve 17 victories, including her eighth World Cup downhill title. She also became the first skier in history to have won 20 crystal globes. While she had to settle for a bronze medal in the downhill competition at the 2018 PyeongChang Games, she's still considered the best female ski racer of all time.

Vonn is the only American woman to win the gold for downhill at the Olympics (at the 2010 Vancouver Games), and the only American woman with four World Cup overall titles, according to USSA. She also holds the women's record for the most total World Cup wins: a staggering 81. She's one of only six women to have won World Cup races in all five categories — downhill, super-G, giant slalom, slalom, and super combined. She's won three Olympic medals (she scored the super G bronze in 2010), and holds five World Championship medals, including double gold in 2009.

Vonn has been competing since she was 7 years old, according to Biography, so Knight's coaching can't be credited for all of her success. In 1999, she became the first American woman to win the slalom race at Italy's Trofeo Topolino when she was just 14. But no matter who's training her, Vonn's always racing for her first teacher, her grandfather. He passed away in November, ESPN reported, and Vonn brought some of his ashes to PyeongChang to scatter by the men's downhill slope. "I miss him so much," she said. "He's been such a big part of my life." Vonn wanted to win for her grandfather, she said, and she thinks he would be proud of her bronze medal. She also said that as a veteran of the Korean War, "I know that it would mean a lot to him to be back here," according to ESPN.

Vonn may have won the bronze for her grandfather, but there's another secret to her success: perseverance. When USSA asked Knight what makes a champion, he cited a winning attitude that clearly describes Vonn:

A champion is an athlete that can overcome odds that defy expectations. They can push harder and longer, have a true mental edge over others and just don’t give up.