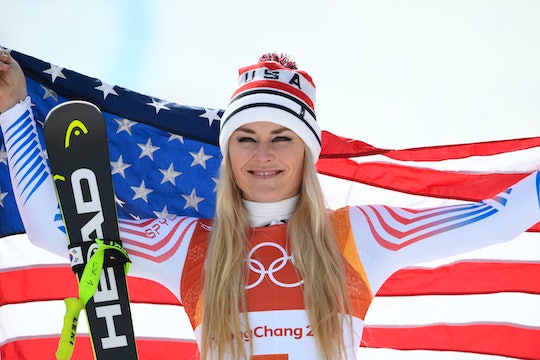 One of the most compelling things about an Olympian is their family background. Achieving greatness and incredible feats of success is literally a team effort, to say the least, and many Olympians relied on the support of their loved ones to get where they are today. Case in point: Lindsey Vonn has reiterated time and time again how thankful she is for her family, and that their support has made her career as Olympic alpine skier possible. And most notably, Vonn named her late grandfather as the driving force behind her success. So, who is Lindsey Vonn's grandfather? Vonn recently opened up about her grandfather's strong influence on her life at the 2018 Olympics in PyeongChang, South Korea.

If you've been following along with the coverage of the 2018 Winter Games, you might have noticed the initials "D.K." written on Vonn's helmet in permanent marker. As it turns out, D.K. are the initials of Vonn's late grandfather, Don Kildow, according to NBC Olympics. Kildow, who died in November 2017 at age 88, had a very close relationship with Vonn, and he's the one who initially introduced her to skiing. Not only was Kildow the biggest champion of Vonn's Olympic dreams, but his death inspired Vonn and her father, Alan Kildow, to end their estrangement, according to the New York Post.

And shortly after Vonn won the bronze medal in the last downhill race of her career, she gave an emotional interview about making her grandfather proud. Vonn said through tears, according to For The Win:

It’s been really hard for me not to get emotional for so many reasons, especially because of my grandfather. I wanted to win so much because of him, but I still think I made him proud. Our family never gives up, and I never gave up. I kept working hard, and I’m really proud of this medal – and I know he is too.

Given Kildow's impressive background, it's no surprise Vonn hoped to honor his memory at the Olympics. Kildow, who served in the Army Corps of Engineers during the Korean War, according to USA Today, took on the responsibilities of caring for his family at age 16 after his father unexpectedly passed away. Vonn's fitness coach, Alex Bunt, can't help but see Kildow's resilience in Vonn. "Her toughness," Hunt said, according to the Bleacher Report, "comes from her family, and her grandfather."

Despite Vonn's inner strength, however, she's vulnerable when it comes to the topic of Kildow. Prior to hitting the slopes, Vonn opened up about how much she misses her grandfather, according to PEOPLE:

I miss him so much. He's been such a big part of my life. I really hoped that he would be alive to see me, but I know he's watching, and I know that he's going to help me and I'm going to win for him.

Although Vonn struggles to cope with the loss, she's able to connect with her grandfather's memory when she's skiing. Vonn explained, according to Good Housekeeping:

If it wasn't for my grandfather I wouldn't be racing. My grandfather taught my father how to ski. It's because of him that it is in our family. It was a huge loss to me and my family. I think about him all the time, especially when I'm racing. And I feel closer to him when I'm skiing.

Vonn also maintains her connection to her grandfather through social media. Vonn regularly pens messages to him on Instagram, and most recently, on Feb. 1, she shared a sweet throwback photo of the pair hanging out on the slopes. "I really miss my Grandpa," Vonn captioned the shot, according to Instagram. "I wish he was still here so badly."

You don't have to be a sports fan or athlete to relate to Vonn's deep bond with her grandfather. Anyone who has suffered a loss can likely understand Vonn's desire to make him proud. And while Vonn is moving on from the Olympics, it's a safe bet she'll continue to honor her grandfather's memory in the next phase of her life.