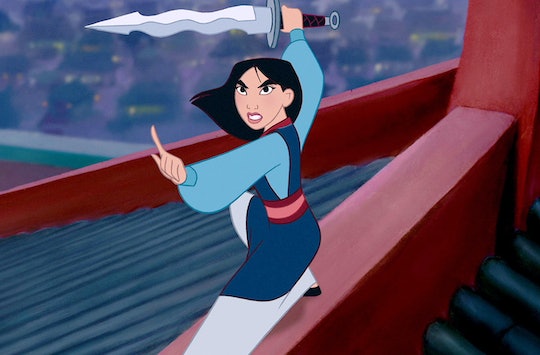 You guys, Disney's live-action remake of Mulan is slowly but surely starting to take shape, and it sounds like the production company has finally decided on a star for its show: according to Deadline, actress Liu Yifei will play Mulan in the adaptation, which could be released in theaters as early as 2019. But just who is Liu, where have we seen her before, and is she prepared to be one of the most badass Disney princesses of all time?

Liu — also known as Crystal Liu — is a Chinese actress who's been acting since she was a teenager. While she's become a household name in China, she's also starred in several English movies, including The Forbidden Kingdom in 2008 (alongside none other than Jackie Chan and Jet Li) and Outcast (along with Nicolas Cage and Hayden Christensen). She's also well-known for her work in The Chinese Widow, Once Upon a Time, and The Assassins, according to Collider.

According to The Hollywood Reporter, casting directors put in plenty of work before choosing Liu as their princess, visiting several continents and interviewing close to 1,000 actresses for the role before settling on Liu. They reportedly wanted their Mulan star to have believable martial arts skills, the ability to speak English, and Chinese ethnicity (because who needs another white actor cast as an ethnic character, really?).

Liu marks the first major casting decision for the remake of Mulan, but we do know a few other key details. According to Disney blog Oh My Disney, the film will be directed by Niki Caro — who is well-known for her work on Whale Rider and the recent The Zookeeper's Wife — and produced by Jason Reed, Chris Bender, and Jake Weiner.

Caro's view for Mulan is to keep it culturally authentic and source from more than just the 1998 animation. "The live-action is based on that inspirational Chinese ballad and on the animated Disney classic," Caro told The Hollywood Reporter in March. She explained that she planned to work with Chinese history and culture experts in the making of the movie as well, saying, "To be specific and authentic is to be universal."

Can you expect to hear all your favourite songs from the 1998 classic in the new remake? That's another thing that the production team is still exploring, according to Caro. "We're still exploring the role that music's going to play in it, but for sure there will be music," she told The Hollywood Reporter.

Waiting for more details about the Mulan remake might seem painfully slow (I mean, I need to know who Mushu will be ASAP — or if the live-action reboot will even have a sassy, talking dragon), but luckily, there are a few other upcoming Disney live-action remakes to keep your eye on in the meantime. A Dumbo adaptation is currently in the works, as well as The Lion King (starring none other than Beyoncé as Nala), and Aladdin. There is also a Jungle Book 2 and The Sword in the Stone remake planned, as well as adaptations of both Peter Pan and Pinocchio. (Disney's definitely got a couple of busy years ahead of it.)

Personally, I'll be preparing for Liu's live-action Mulan by watching all of the best clips from the 1998 animated classic. If you take a look, you can also find the original Ballad of Mulan translated into English online as well, and since Caro plans to draw inspiration from it, it's likely a good poem to get familiar with.

The new Mulan is meant to hit screens by 2019, according to Deadline —  but keep an eye out for any updates in the meantime. I know I will.