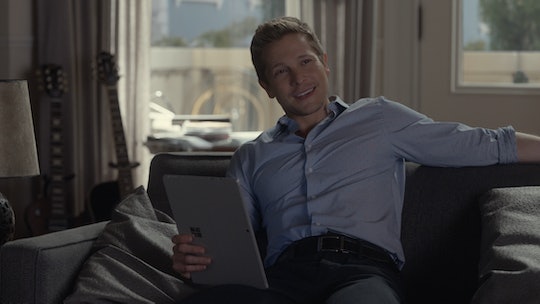 Who Is Logan's Fiancee On The 'Gilmore Girls' Revival? Odette Still Remains A Mystery

From the first time Logan appeared on screen in the revival, it was clear that he was at least dating other people besides Rory. It wasn't revealed until later that he was actually engaged. So who is Logan's fiancée on the Gilmore Girls revival? Her name is Odette and even now she still remains a mystery. In fact, we never even see her face on-screen. This is perhaps intentional since this way the audience doesn't spend too much time thinking about this poor woman who presumably doesn't know that Logan has been hooking up with an ex-girlfriend while she is out of town. But still, it would be nice to put a face to the name.

We get one shot of a sleeping woman when Rory calls Logan in the middle of the night (by the way, rude), and we hear her call "Logannn!" in a familiar and French way when walking in the door. But that's really all we get as far as proof that Odette actually exists. According to Mitchum Huntzberger, Odette is a French heiress who, until about the middle of "Summer," was living in Paris, after which she moved in with Logan in London. Rory balked at the idea of staying a hotel and waiting for Logan to slip out and see her, so presumably Odette is unaware of Logan and Rory's "what happens in Vegas" agreement.

We also know that, according to Logan, their marriage is part of the "dynastic plan," implying that this is a good old-fashioned political marriage, arranged in large part by the couple's families and designed to keep the family money in the family. Frankly, I wasn't aware that this was even a real thing anymore, but I have never been an heiress so I can't really speak from experience. What I do know is that Odette has been dealt a pretty raw deal here.

Yes, I know that I'm supposed to be all Team Rory here and I am, if only out of loyalty. But I also think that Rory sleeping with an ex-boyfriend who's attached to someone else isn't the greatest idea she's ever had. Sure, she's a grown woman and can live her life as she sees fit, but we've been down this cheating road with her before back in Season 4, so it feels like an unnecessary story arc to revisit.

Who is this Odette? Is she sweet? Is she horrible? Does she have dreadful taste in music, but excellent taste in clothes like Christopher's Sherry? The point is that we don't know. We can hate her out of solidarity for Rory, but I think we should give the poor woman a chance. Maybe she should dump Logan (since obviously, this isn't true love) and go find a nicer heir to marry. Unless she also has a similiar set up with a former flame on her end. In that case, maybe she and Logan really are the perfect match for each other?