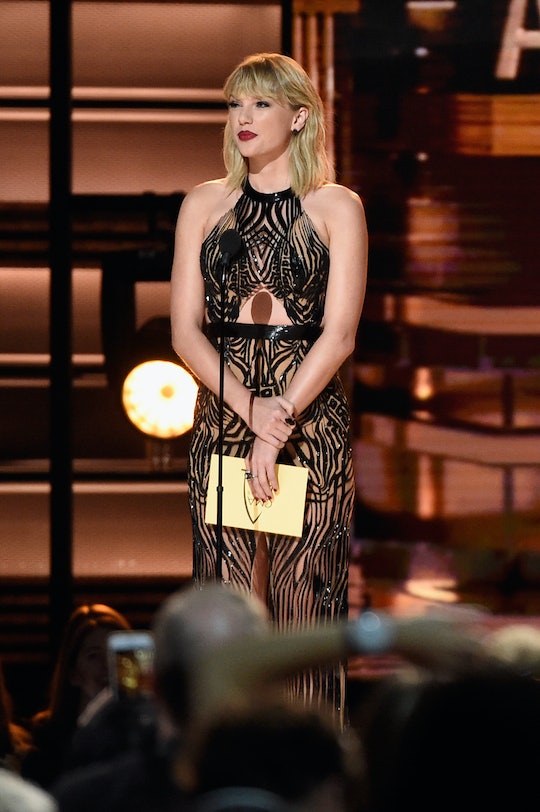 Taylor Swift has, for the most part, remained out of the spotlight for the majority of 2017. Fans took this silence in one of two ways: it was either a fall from grace after having much of the public turn on her during 2016, or she was planning an album. Judging by the recently released name of her album, Reputation, it may have been both. And, aligned with true Taylor Swift fashion, the singer's song is very clearly about someone. But, who is Taylor Swift's "Look What You Made Me Do" about? The singer has a history of putting her friends (and foes) on blast.

In recent years, Swift's feuds with other celebrities have become quite public. According to Rolling Stone, Katy Perry and Taylor Swift's feud goes back to 2013, involving backup dancers and album tours. It's a story fans have become all too familiar with — the feud actually started when Perry "poached" backup dancers from Swift's tour, but it only grew from there. As many know, Katy Perry was the rumored focus of Taylor Swift's "Bad Blood" single, though it was never confirmed. For her part, Swift did say that the song was about another pop star, saying in her Rolling Stone cover story, "She would come up to me at awards shows and say something and walk away, and I would think 'Are we friends, or did she just give me the harshest insult of my life?'"

With that said, fans know that Katy Perry is just one name on Swift's potential inspirations. Some fans are pointing out that the song might be about Kim Kardashian and Kanye West, who famously took down the actress last year with the #KimExposedTaylorParty, a series of SnapChats that Kardashian posted of West on the phone with Swift consenting to the infamous "Famous" lyrics Swift disregarded.

One huge clue that the song is about Kanye West is the line "tilted stage," which many fans and Rolling Stone notes could be a slight at Kanye West's tilted stage during his Saint Pablo tour.

Of course, Swift will probably never come clean about who this song is about, but there is also the chance that this song is about more than one person. In the song, Swift sings, "Maybe I got mine, but you'll all get yours," as if she's referring to multiple people. Could this be Swift's final takedown of everyone she feels has brought her to "do" the album Reputation? We won't know until the entire album is released, but until then, let the theories begin.