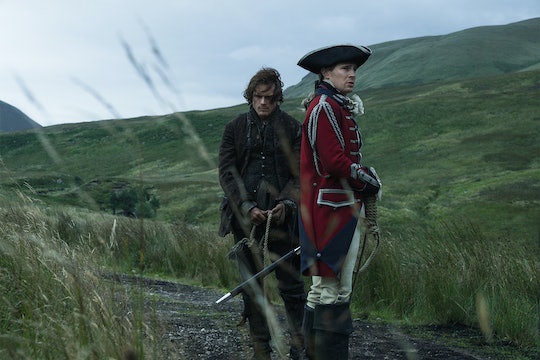 Lord John Grey Is Important In The 'Outlander' Books

Now that Season 3 of Outlander has arrived at long last, fans of the show get to meet a bunch of new characters and faces. And some characters, who had roles so small you may have forgotten about them, are coming back, including a certain honorable English lord by the name of John Grey. If you want a head start, you may be wondering who is Lord John Grey in the Outlander books? He's going to play a big part in Jamie's life coming up. Warning: book spoilers ahead!

So for a little backstory. If you can remember all the way back in Season 2, Jamie and Claire were leading a faction of Highlander soldiers on their way to the rebellion, which would eventually end in the Battle of Culloden. A very brave and very unwise teenage English soldier, played by Oscar Kennedy, managed to sneak into their camp and attempted to cut Jamie's throat. The gambit obviously failed. But Jamie used the boy to get some vital information about the nearby redcoat encampment with help from Claire, who pretended to be a hostage on the brink of rape, torture, and other unpleasantness. It didn't take long for the boy to spill everything he knew.

But instead of killing him, Jamie let the boy leave with his life. As he left, the boy told Jamie his name is Lord John Grey and he owes him a debt of honor. Grey must save Jamie's life at some point and once that debt is paid, then he is free to kill him.

At the beginning of Season 3, Jamie was about to be executed by English officers when one recognized his name. The officer about to execute him was Lord John's brother! Now he had to save him because John Grey owed him a debt of honor and if he were to break it, he will sully the Grey name. (Honor is extremely inconvenient, everyone.) So Grey let Jamie go home in a wagon, assuming he'd die on the way there. Of course, Jamie does not die because come on now — that's no way for James Fraser to go. But this is not the last Jamie will see of the Grey family by a long shot.

In Episode 2, Jamie gave himself up to the redcoats so they would stop harassing his sister Jenny and her family at Lallybroch. And it turns out that Lord John Grey, now an adult and played by David Berry, is in charge of Ardsmuir Prison where Jamie is sent. Jamie, being Jamie, gains the respect of the prisoners who elect him as a sort of leader. He also eventually earns the respect of John Grey, who develops romantic feelings for him. Once past the initial awkwardness of that, the two develop a strong bond during their time together. Once a week, Lord John invites Jamie to discuss the other prisoners. They chat and play chess. Eventually, Lord John's affection for Jamie leads him to release him from prison, and from there Jamie heads to England.

While in England, Jamie is working as a groom for the Dunsany family, when one of the family's daughters becomes helplessly infatuated with him. (Understandable.) She blackmails Jamie into sleeping with her. (Not so understandable.) Just to complicate things further, she gets pregnant and then dies giving birth to a son named Willie. Willie goes into the care of her sister, who eventually marries... you guessed it! Lord John Grey! This makes Grey the de facto father of Jamie's son.

I won't spoil everything for you because there is so much more adventure to come that involves Jamie, Claire, Lord John, and Willie in further books. Suffice it to say that Lord John Grey was such a popular character, author Diana Gabaldon wrote him into his own series of books. In his own series, John has his own adventures and contends with his deep love for his family and tradition and his homosexuality in a time when homosexuality was against the law. Does this mean a Lord John spinoff on Starz is in the works? Fingers crossed.