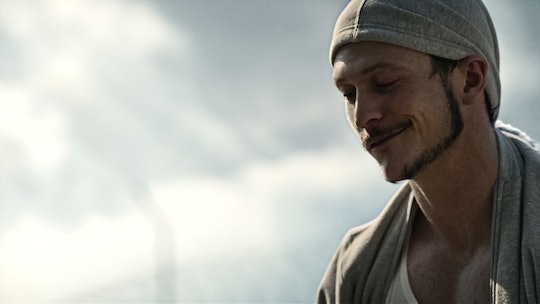 American Gods follows Shadow Moon, an ex-con roped into a war between gods when he's recruited by Mr. Wednesday. Shadow is relatively easily recruited because he's fresh out of jail — the first chapter of the book on which the show's based finds him being released early, after his wife's untimely death. While all of the major action takes place post-prison, Shadow's time behind bars sets up much of the story in surprising ways — particularly when it comes to his prison friend and cell-mate, Low Key Lysemith. But who is Low Key Lyesmith on American Gods?

Low Key is played by Jonathan Tucker, an actor best known for his roles in the movie The Virgin Suicides and several TV shows, including Parenthood, Kingdom, and Hannibal (the latter also a show created by Bryan Fuller, American Gods' showrunner). Shadow's prison "confidante" Low Key is described by Starz as "a surprisingly philosophical individual," "wiry and fast talking, with an offbeat sense of humor." Low Key also gives Shadow some "sage advice to ready him for the outside world." That aspect of their friendship is demonstrated in the Starz promo "Lessons from Low Key Lyesmith," when he cautions Shadow about "pissing off those b*tches in airports" by telling him a story about a fellow prisoner who wound up back in jail after having a confrontation with a gate agent.

And here's a fun fact for you — according to Tucker's interview with Collider, he and Ricky Whittle (who plays Shadow) actually shot their prison scenes at an active penitentiary in Oklahoma.

Yep, that definitely looks like a genuine prison. But while at first glance, Low Key just appears to be a minor (albeit memorable and scary-looking) character from Shadow's past, it turns out that he has a much greater bearing on the story than you might expect. Warning: spoilers from the novel ahead!

In the book, Low Key is eventually revealed to be Loki, the Norse trickster god and the son of Odin — aka, Mr. Wednesday. Loki takes various forms, and one of the forms (in addition to Shadow's prison pal) is Mr. World, "the seemingly omniscient leader at the center of the New Gods coalition, sometimes more challenged by his own subordinates than his enemies" (according to Starz's official character description). Mr. World is played by Crispin Glover on the show.

Though the network isn't advertising that the characters are one and the same, the twist has been something of an open secret on the press circuit — and if you even say Low Key Lyesmith out loud, you realize you're saying "Loki Lie-Smith," a realization that Shadow has towards the end of the novel. In the same Collider interview, Tucker explained that he only appears in three scenes this season, but that's he's due back for the show's second season (if Starz orders a follow-up).

In Gaiman's interview with Observer, the author estimated that the first season covers about the first third of the novel. So, if I had to guess, I'd think that Low Key's true identity will be revealed at some point in Season 2 (or beyond). All the more reason to cross your fingers for the show's renewal.