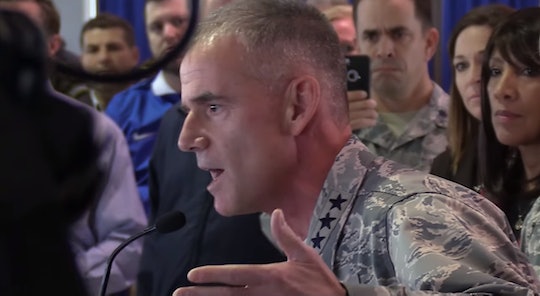 Lt. Gen. Jay Silveria To Air Force Cadets Not Appalled By Racism: "Get Out"

On Monday, racial slurs were found scrawled on the dormitory message boards of five Air Force Academy Preparatory School cadets, and the school's superintendent fired back in a powerful way on Thursday. Before this week, most civilians probably didn't know who Lt. Gen. Jay B. Silveria is, but his response to the hateful slurs has caught the eyes of the nation, and his unequivocal rebuke of racism made it clear where he stands. These days, that's a pretty refreshing position.

Earlier this week, Tracye Whitfield told Colorado Springs' KKTV that her 18-year-old son, as well as four other black cadets at the prep school, discovered the words "Go home" followed by a racial slur written on the whiteboards outside their dorm rooms. The prep school is a 10-month program that prospective students attend before acceptance to the four-year Air Force Academy program. "So many young black men are getting killed, and there is no justice for them," Whitfield told the local news station. "It’s a nerve-racking feeling. These racial slurs cannot be tolerated." On Thursday, Silveria gathered the school's 4,000 students and 1,500 staff members to hear his condemnation of the incident, and what place racism has within his Academy (spoiler: it's none).

Addressing the slurs on the boards, Silveria said, "If you're outraged by those words, then you're in the right place. You should be outraged not only as an airman, but as a human being." And for those who thought that what happened at the prep school had no bearing on the Academy at large, Silveria said, "We would be naive to think that we shouldn't discuss this topic. We would also be tone-deaf not to think about the backdrop of what's going on in our country. Things like Charlottesville and Ferguson, the protests in the NFL."

The school has struggled with sexual harassment issues in the past, but the issue of racial bias has mostly flown under the radar. In 2010, a USAFA Climate Survey revealed that 27 percent of minority students said they'd witnessed harassment or discrimination based on race or ethnicity, according to the Colorado Springs Independent. That same year, the Atlantic reported, the school appointed its first chief diversity officer. The U.S. Air Force is currently 72 percent white, according to its own records, and the Academy is 70 percent white. Clearly there's still work to be done.

It looks like Silveria might be the man for that job. A career Air Force man, Silveria graduated from the Academy himself in 1985, according to his bio. He holds a master's degree in social sciences from New York's Syracuse University, and he's earned a Bronze Star Medal as well as a Distinguished Service Medal, the highest military award bestowed for service outside combat. Before his appointment as Superintendent this past August, he served as Deputy Commander, U.S. Air Forces Central Command, and according to the Colorado Springs Gazette, he's "one of the Air Force's most experienced pilots," clocking over 3,900 hours in the cockpit.

In his speech on Thursday, Silveria encouraged his students and staff to engage in civil discourse, and spoke to the power of diversity, which "makes us that much more powerful." After calling out those who would demean those of another race or gender, Silveria asked the audience to take out their phones and record his final words: "This is our institution. And if you need it, you need my words, then keep these words. And you use them, and you remember them, and you share them, and you talk about them. If you can't treat someone with dignity and respect, then get out." Couldn't be simpler than that.