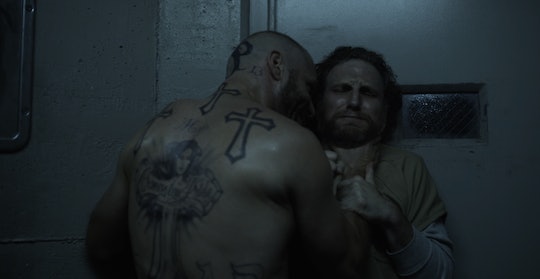 Who Is Lucas Goodwin's Prison Cellmate On 'House Of Cards' Season 4? Gagik Is Scary AF

Well, that was certainly one way to kick off the beginning of Season 4 of House of Cards. Though Lucas Goodwin's fate was left fairly up in the air (we knew he was headed to jail, but where?), I definitely wasn't expecting to meet his roommate so, uh, intimately. Because this is House of Cards and there's no one introduced on the show who doesn't serve a greater purpose, I wondered who is Lucas Goodwin's tattooed prison cellmate, and beyond that, why'd we have to creep up on the guy when he was in the middle of doing his thing? (Spoilers ahead for Season 4, Episode 1 of House of Cards.)

My first impression of Goodwin's prison cellmate, whose name is Gagik, was that he's physically intimidating, covered in tattoos, and bald. Yeah, I know, not necessarily an overwhelming first impression, but I think the message was pretty to the point: You don't want to f*ck with this guy. Gagik's character is played by actor Elan Zafir, according to his IMDb profile. If you can ignore the fact that our introduction to his character comes in the midst of a spoken-word jerk off (I tried really hard to think of a eloquent way to say that, but I'm drawing blanks here), you'd know that: 1. Lucas Goodwin is alive and well, 2. Gagik is involved with some type of mafia, mob, or crime organization, and 3. Lucas Goodwin is working for the government, using the intel Gagik provides for some ulterior purpose. Obviously information on Gagik is a bit harder to dig up given that it's only the first episode and our first introduction, but I'm guessing it'll come out in due time, especially as the relationship between the Goodwin and Gagik evolves.

Though there's not much to pull from, we do get decent amount on Gagik's past: He'll be in jail for at least another 13 years, if not more (when he talks about the kid in his wife's belly, Lucas reminds that he'll be a "teenager" before Gagik is out to see him); and he might be doing time for a crime he didn't even commit. After telling Lucas that his wife thinks he belongs in "this sh*thole," Lucas presses further, reminding Gagik that he did kill a guy. Yet when Lucas asks if he's trying to tell him he didn't, Gagik responds with a physical warning by way of choking. He then says, "You don't know what I am," and that puts settles that.

But when Lucas confesses that he thinks Gagik is innocent, Gagik pauses, then concludes that maybe what Goodwin thinks is true. "These guys will skin you alive," Gagik tells Goodwin, "[and] make you watch in the mirror while they do it." Gagik's referring to Armenian Power in LA, and then adds that he took the fall for the group's top guy.

The scene cuts away, and surprise! someone else has been listening to the entire conversation. It isn't immediately clear that Lucas is using Gagik's information as his own get-out-of-jail free card, but that's definitely what it looks like is going on. At the end of the episode, Lucas is gifted with an entirely new identity, which, like, great for him, but what happened to Gagik? Is he a good guy, a bad guy, a guy that's going to come back and make Lucas pay for his disloyalty? (Is "what happened in jail, stays in jail" a thing?) If I had to guess, I'd say I'm definitely banking on the latter. And judging from Gagik's death grip, that should scare the hell out of Lucas Goodwin.