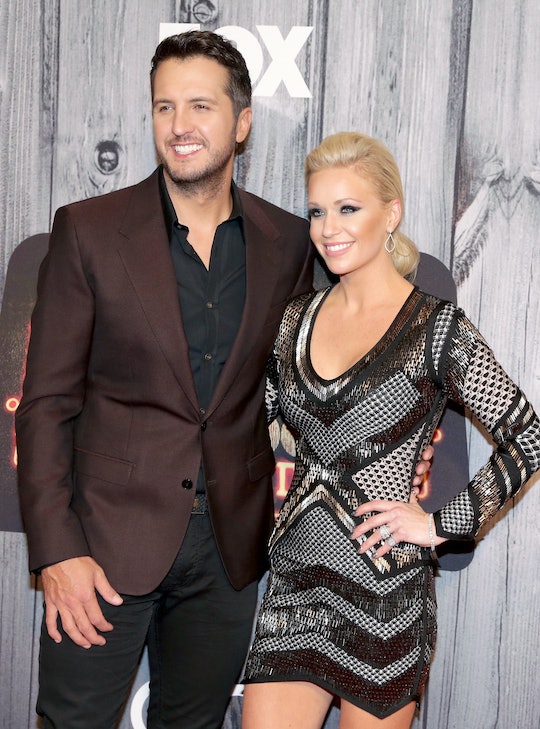 Who Is Luke Bryan Married To? He & His College Sweetheart Have A Cute Story

Country music fans are definitely looking forward to this coming Sunday, because it's possibly the biggest night each year in country music: the broadcast of the 51st Annual Academy of Country Music Awards. Popular country singer Luke Bryan has been tapped to co-host the event along with Dierks Bentley, and CBS will air the show live from the MGM Grand Garden Arena in Las Vegas, according to the official website. And, aside from the guarantee of great performances and gorgeous people throughout the broadcast, some viewers are certain to be drooling over fan-favorite Luke Bryan’s good looks and asking themselves serious questions about the singer's private life and whether there’s a chance the singer could one day give them a call. Fans will want to know whether the star is single and — if not — just who is Luke Bryan married to?

Well, I hate to be the bearer of bad news and break so many hearts in the process, but it turns out Bryan has been married for almost 10 years to Caroline Boyer, his college sweetheart, according to Entertainment Tonight. The two have known each other since their college days and married in 2006, just before Bryan took off in the country music scene, which means they’ve been an item for just over 15 years. That’s pretty much a lifetime in the entertainment industry.

Bryan met his wife Caroline Boyer in 1998 while both were attending Georgia Southern University in Statesboro, the singer told the Huffington Post back in 2012. Bryan was a senior, but Boyer was a freshman. And, as she told People magazine years later, the future star had none of the swagger that fans now know him for when the couple first met:

We hung out as friends first and he never made a move on me. I kissed him first! He was always so scared of making a girl feel uncomfortable, he wouldn’t cross a line.

But, like so many college romances, the couple had a few fits and starts, according to Bryan. They dated off and on for almost six years before running into each other — once again — in a little bar in Statesboro, according to the Huffington Post:

She just happened to kinda be in town. We kinda saw each other and talked a little bit and then started emailing back and forth a little bit. And she was like, ‘Hey, you want to come to my family’s Christmas party?’ I went to the party and the rest is history.

The couple have been married for almost 10 years and have two sons, according to People. But, over the last year, several high-profile divorces in country music have thrown a spotlight on the couple’s long-running marriage. News that country sweethearts Blake Shelton and Miranda Lambert planned to end their marriage left fans reeling, and, as close friends of the couple, Bryan and Boyer weren’t immune from the shock. Still, in an interview with Taste of Country magazine last year, Blake said that he only wanted the best for Shelton and Lambert:

In my life, I’ve dealt with a lot of permanent loss where you know you can’t get people back, and I just always pray — certainly in Blake and Miranda’s case — that they’ll be happy, you know, however, whatever shakes out, and anybody going through that.

Fans will certainly be excited to see the happy couple on the red carpet this Sunday, when Bryan hosts the Academy of Country Music Awards for the fourth time in a row. The show airs on Sunday, April 3 at 8:00 p.m. on local CBS stations or online at CBS.com.