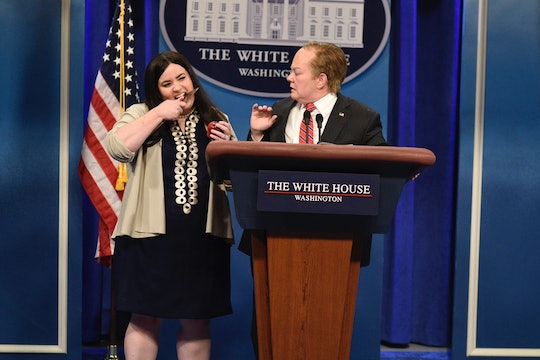 With the departures of Bobby Moynihan, Vanessa Bayer, and Sasheer Zamata, Saturday Night Live had some big shoes to fill. And filled they have been by some very fresh faces, one of whom is from Chicago, where comedians are apparently bred. So who is Luke Null on SNL? His official job title is musical comedian, but he has also described himself as a "naughty boi" and "5-time divorcee." I am definitely looking forward to meeting this guy.

As reported by The Los Angeles Times, Null attended Ohio State University, and hails from the legendary improv theater iO Chicago. This is the improv theater that is responsible for launching the careers of basically all of your favorite comedians. These include: Tina Fey, Amy Poehler, Stephen Colbert, Chris Farley, Bill Hader, Mike Myers, Seth Meyers, and so many more, including Vanessa Bayer herself. Maybe Bayer and Null actually know each other? Speaking as someone who went to college in Chicago, the place is truly iconic. Everyone in that city knows somebody who's part of a comedy troupe at that theater, and everyone has gone at least once. If you're ever in Chicago, check it out and see if you can spot Saturday Night Live's next hire.

In Chicago, Null was part of the improv and sketch comedy troupe Newport Hounds, where he combined his comedy and guitar skills to excellent effect. He also has one IMDB credit, the movie The Heart: the Final Pulse, reference to which I cannot find anywhere else. I think it's a horror movie, but it could very well be a parody of a horror movie. I don't know. He plays a character called Luke. So there's that.

But what else can we find out about this mystery comedian? Well, I can go to my favorite stalking strategy,:social media. Here is what I've discovered.

Like all great comedians, Null is totally willing to poke fun at himself. For example, he shared this less-than-flattering picture of himself as a teenager in high school with the simple caption "high school was rough." Same!

In fact, Null shares a lot of childhood photos with similarly amusing captions. For example, this photo of his "21st birthday." I am thoroughly enjoying the snark.

Null is not a frequent poster, but when he does it's often pictures of Chicago, a home he clearly loves. Honestly, who doesn't love Chicago? It's like New York City, but cleaner and with wider streets and slightly more polite people.

Some further exploration also tells me that Null is the owner of a cat, possibly named Pinto Bean, and that he sometimes takes pictures of his beverages, like one of a fancy cocktail or cans of RC Cola. Honestly, after lots of scrolling, my verdict is simply that this guy is almost aggressively normal. It is very much a "before fame" Instagram account. This makes sense considering the overall lack of concrete information about him, though I have a feeling that's about to change and soon.

Saturday Night Live has been the jumping off point for so many major comedians over the years, launching highly successful acting careers. Just look at Kristen Wiig and Kate McKinnon who both got where they are because of the classic show. Perhaps Null is destined for a career just as bright. In that case, let's all enjoy this rare look into a proto-celebrity's inner life before he gets bombarded by fame.