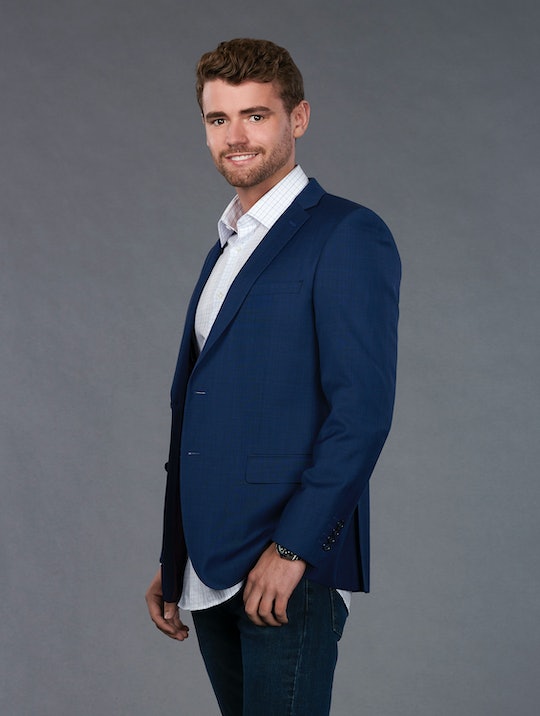 Hannah B. May Have Met Her Match In The Awkward Department With This Guy

Hannah Brown — aka Hannah Beast — is prepared to break the hearts of over 30 men. That's right. By the time all is said and done, the newest Bachelorette will use Season 15 of the franchise to its fullest advantage as she searches for her forever love. There are tons of eligible, credible, and worthy men competing for the final rose, but if you want to make the case for love and marriage, you should probably get to know one of the most talked about suitors. Who is Luke S. on The Bachelorette this season, and does he have what it takes to "roll tide?"

Luke S. may only be one of many Bachelorette contestants vying for Hannah's heart, but he's the talk of his Washington, D.C. area bar. According to Washingtonian, Luke S. worked part time at a bar called Stoney's, where they're airing the show in solidarity. Luke's general manager, Anthia Smith, had one guess as to why he's on the show, explaining, "He has that pretty way to him." Looks are great and all, but in case Hannah's looking for more depth (and I'm pretty sure she is), his LinkedIn profile states he worked as a fundraising consultant at Fraioli & Associates, and is a GWU graduate where he studied Political Science and Art History. All that aside, his social media accounts are all private. There are a few Facebook photos set to public view, which means it must be your lucky day.

If Luke S. looks familiar, he was one of the first five guys to meet Hannah on The Bachelor: After the Final Rose immediately after she was announced at the Season 15 Bachelorette. He was the guy who made an uncomfortable innuendo about "going south." Yikes. The good news here is that Stoney's bar manager, Reese Edmonds, told DCist Luke was hoping Hannah would be the Bachelorette. "When he told me, I was a little intrigued," she said. "He said he thought he knew who the girl was: 'I do want it to be this chick from the South, her name is Hannah. She’s really cute and goofy'. He really wanted it to be her."

His official ABC bio makes him sound a little more admirable claiming he worked as "a political fundraiser on Capitol Hill," and is "a tequila expert and entrepreneur." Of the fun facts listed, people mistake him for former Bachelor, Nick Viall. I can totally see it.

Whether Hannah wants to give her heart to the political consultant and server remains to be seen. As one of the more polarizing choices for the show's lead, Hannah's "love her or hate her" persona has more to it the more she opens up. Even with her oddball traits, she won't hesitate to call anyone out. Not to put Luke S. on notice, but after that uncomfortable first meeting, fans hope the premiere brings a little more sustenance to the conversation. I'm sure Hannah will make the most of it. You're doing great, Hannah, sweetie.

Who knows if Luke S. will make it too far past the initial re-introduction. It's too early to make any big guesses, but — and this is just my opinion — if you judge him by that After the Final Rose situation, I'm not sure Hannah will keep him around long. That's a little too much awkward in one space.