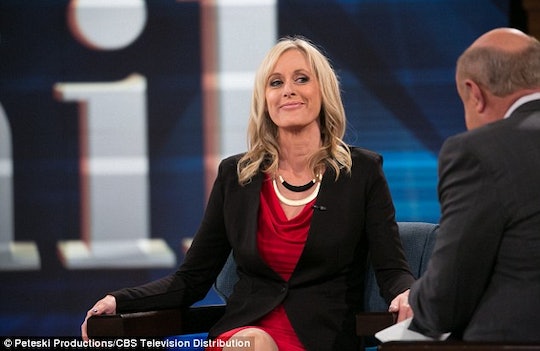 Who Is Lynn Hartman? Steven Avery's Fiancee Is Opening Up To Dr. Phil

There is no question that Steven Avery has dominated the true crime genre for the past year. But now, it's not Steven Avery who is speaking out about Steven Avery. This time around it is Lynn Hartman, Steven Avery's fianceé who is set to appear on Dr. Phil Oct. 3 and Oct. 4 to talk about her relationship with Avery, something fans of Making a Murderer are undoubtedly interested in hearing. But who is the woman that is in love with Steven Avery, a man who has led many to question guilt and innocence since Making a Murderer premiered on Netflix in December 2015?

The love story started in an unusual way. Hartman told People that she originally didn't want to watch the Netflix hit because, as a fan of Nancy Grace (who covered the phenomenon on her own show), "believed what [Nancy Grace] said about the case." The legal secretary was actually going through her own divorce at the time, and eventually succumbed to her daughter's request that her mom watch the docu-series. After that, she came around to believing that Avery was innocent in the murder of Teresa Halbach. (Avery still remains in prison after being convicted of the murder.)

After watching the series, she took to writing letters and sending him pictures, offering him "any kind of support [she] could in any way that [she] could," she tells People. To her surprise, Avery responded to her letters, sparking true love superseding the confines of a prison cell.

Hartman was initially torn when it came to her feelings for Avery. In an interview with People, she said how she "...kept flipping back to, 'My ex-husband is a police officer and now I've got this inmate telling me he loves me,' " she said. "So it was a conflict that I really went through in my mind. It was a different life for me." A different life indeed.

Hartman also said, "As it turned out, he became a support system for me, my divorce was crushing – it almost killed me" Hartman reveals. "Here I am talking to a man convicted of murder, and he was my support system. But that's what I fell in love with. This man still had the love in his heart to reach out to people and write them with support." Thus, in the aftermath of a divorce, it's easy to see how a moth in the dark like Hartman would easily be drawn to the light illuminating from Avery's consoling words.

The two have conversing for eight months via calls and letters before finally meeting in person. When they met "it was just like magic," Hartman said. "The first moment I laid eyes on him, I just thought he was a teddy bear. The chemistry was there. He came over and sat at the table and we held hands. And it was exactly like I imagined for the months leading up to it."

It will certainly be interesting to hear Hartman speak of her relationship with Avery on Dr. Phil. She is scheduled for two episodes, Monday and Tuesday, and there is no doubt that the public will be interested to see what she has to say about her relationship with the current inmate. We, of course, will also be sitting patiently to see how their relationship unfolds. There's no doubt that just about anything Steven Avery does will be watched intensely by the public.