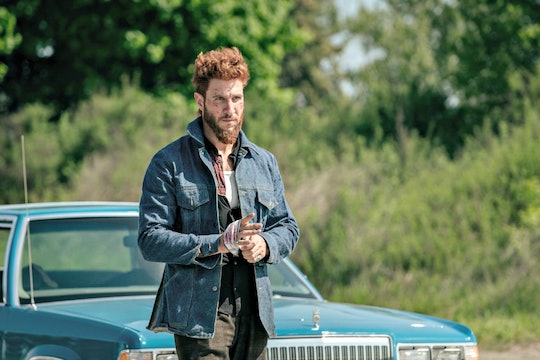 Fans are really looking forward to the Starz adaptation of Neil Gaiman's novel American Gods this season. For good reason, too. It's a great story, with a star-studded cast playing some very complex and other-worldly characters. But the series will be a little bit different from the book. The best example of this is Mad Sweeney's role in American Gods. Mad Sweeney is played by Pablo Schreiber, who fans might recognize as Pornstache from Orange is the New Black. Poor Schreiber just can't seem to get away from roles in which his body hair defines him though. He's ditched the 'stache for this gig, but now he's playing a leprechaun, complete with a short red beard and some "mad" hair.

Yes, Mad Sweeney is a leprechaun, proving that leprechauns don't have to be short. He sides with the Old Gods in the story, all of whom are gearing up to wage war on the New Gods that people have come to worship in modern society (Media, Technology, etc.). He's originally from Ireland and was the guardian of a sacred rock some 3,000 years ago. He came to America with a woman and has been in the "new country" ever since. In the book, Sweeney disappears for a very long time, but it looks like in the TV series, viewers will get to see more of what he was up to.

The main plot follows Shadow Moon, just released from prison, and how he gets caught up in this God vs. God war. And he's gifted a magic gold coin by Mad Sweeney when they first come face-to-face with each other. In some of the first looks that Starz has released, there are scenes with Mad Sweeney and Shadow Moon in the Crocodile Bar, and it looks like they're fighting. (I guess this means Shadow doesn't like his coin gift.)

There are so many ways that Sweeney's character could be expanded. Some fans are even hoping that viewers will get to see how Mad Sweeney came to America or how he can be used to explain the difference between the Old and New Gods, since he's not really a god himself, just a leprechaun with some magical powers under the employment of Mr. Wednesday (played by Ian McShane).

Starz says that Mad Sweeney in the series is a "down on his luck leprechaun" trying to find out where he lost his charm, but from the trailers — Schreiber's Mad Sweeney is definitely going to be a fan favorite. If only because it looks like he's a fan of getting into some trouble.