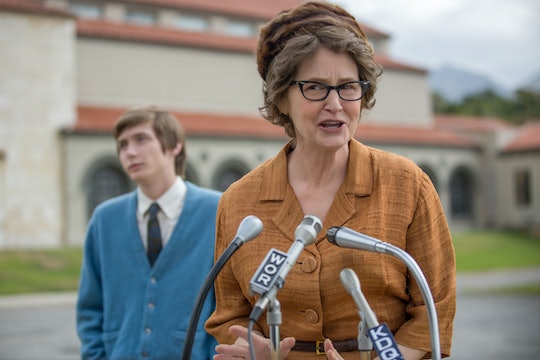 Netflix's latest true crime biopic The Most Hated Woman in America stars Emmy-winner and Oscar nominee Melissa Leo as its titular antiheroine, Madalyn Murray O'Hair. Surprisingly, it's the first film ever made about her life, in spite of her significant contribution to modern history and constitutional law. So who is Madalyn Murray O'Hair? Her life — and tragic, gruesome death — were remarkable.

O'Hair was a mother of two who worked as a psychiatric social worker in the Baltimore public welfare office. Her social activism eventually led her to file a lawsuit against the Baltimore City Public School System on behalf of her son, William J. Murray, Jr., arguing that it was unconstitutional for public schools to force school-sponsored Bible readings on students. Her lawsuit was later combined with a similar one from the state of Pennsylvania and together, the plaintiffs went all the way to the Supreme Court and won. In 1963, the Supreme Court ruled, with a vote of 8-1, that school-sponsored Bible readings in public schools were unconstitutional and therefore banned. From the looks of trailer, it seems like the Netflix film conflates this case a bit with the Supreme Court ruling which banned institutionalized prayer in public schools. But that case didn't involve O'Hair and that ruling was made one year prior to her lawsuit.

Nevertheless, O'Hair's name became synonymous at the time with this push toward a truer separation of church and state. Unsurprisingly, she also fell victim to conservative Christian backlash for secularizing schools as well as moderate and progressive backlash for her approach, which basically amounted to hate-filled rants against religion. O'Hair, however, took advantage of her platform following her Supreme Court victory and founded American Atheists, a non-profit organization advocating for the civil liberties of atheists and fighting for full separation of church and state.

Of course, the fact that she set up shop in Austin, Texas only further targeted her. In 1995, after three decades of controversial atheist activism, O'Hair, her son Jon Garth Murray, and her granddaughter Robin were kidnapped, murdered, and dismembered by David Roland Waters, a former employee of American Atheists, and his accomplices, Gary Paul Karr and Danny Fry.

The victims seemed to survive for about a month of being held captive, buying $500,000 in gold coins and making phone calls to their offices to "check in," apparently under the threat of their captors. But on September 28, 1995, their dispatches abruptly stopped. Fry was killed by Karr and Waters following the murders, and Karr eventually turned on Waters to the police. Karr received two life sentences while Waters was sentenced to 80 years in prison for their crimes. Meanwhile, the bizarre story of Madalyn Murray O'Hair had mostly faded into obscurity, until Leo took up the Netflix biopic as a passion project. The film premieres on Friday, March 24.