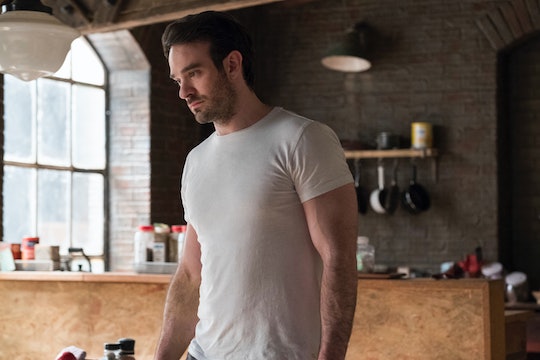 'The Defenders' Just Introduced Someone Important From Matt's Past

Though the Defenders were able to defeat the Hand, there's still a bit that was left unresolved at the end of the season. For starters, everyone currently believes Matt Murdock is dead. But the end of the season finale revealed that's not true. He's actually alive, though very badly injured, and seems to be in a nunnery. The nun sitting by his bed asked someone to "get Maggie," leaving many to wonder: who is Maggie on The Defenders?

The first clue about Maggie's identity was the fact that Matt was in a nunnery. This led many fans to guess that Maggie is Sister Maggie, who also happens to be Matt's mom. Though the show hasn't really gone into detail about Matt's mom yet, in the comics Maggie had postpartum depression after giving birth to Matt. Her depression turned into paranoia, which led to her getting into a fight with her husband — Matt's father, Jack. In order to protect her family from herself, Maggie left and was taken in by a church.

The church helped Maggie overcome her depression, but she never returned home to her family, and Matt grew up with just his father, who was later killed. In the comics, Matt first met Maggie when she saved him, just like she seemingly just did on the show.

Though it's unclear how Maggie was able to save Matt from the explosion, many viewers agree it will be Maggie that nurses Matt back to health. But will she tell him who she is or keep her true identity a secret? In the comics, Maggie didn't tell Matt the truth, but because of his enhanced senses he was able to tell she was lying and figured it out.

Because Matt hasn't mentioned his mother on the show yet, it's unclear if Maggie's story will remain the same from the comics to the show. Did Maggie also leave her family in the show or does Matt believe his mother is dead? How will he react when he reunites with his mother as an adult? Will he be angry or just happy to see her? It could go either way.

For now though, most viewers are just happy Matt survived the explosion that took out the Hand. However, I'm sure some can't help but wonder if Elektra was also saved, since Matt was holding her in his arms when the explosion took place. Unfortunately, fans will just have to wait until the third season of Daredevil is released to find out.