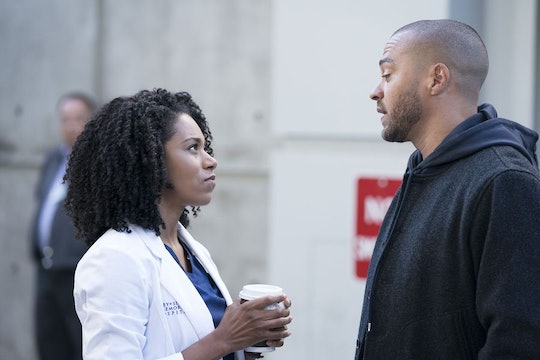 With so much happening on Grey's Anatomy, sometimes it can be hard to keep track of what's going on in the doctors' personal lives, especially if they're not dating a fellow doctor. For instance, many fans may have forgotten that Maggie is currently in a relationship with someone. So who is Maggie's boyfriend on Grey's Anatomy? He's popped up once or twice.

Earlier on in Season 14 Maggie decided to give Tinder a real shot, and that's where she met Clive Johnson. However, the day they scheduled their first date, was the same day the hospital was under a cyber attack and she and Jackson had to fly to another hospital with a patient. The pair's little solo trip ended up with Jackson asking Maggie to have a drink with him, but after Maggie pointed out how their relationship would be very complicated, Clive then showed up.

Though she hesitated, Maggie decided to go on her date and the rest is history. While we haven't actually seen Clive that much (he's only appeared in two episodes so far) he has been mentioned. During the last episode, Maggie and Arizona got into a conversation about their sex lives, and while Maggie didn't offer too much info about how good Clive is in bed, she did say that he's nice.

However, on this week's episode it appears fans are going to really get to know Clive. In a sneak peek, Amelia suggested that Clive come over to the house for game night so she and Meredith could grill him and make sure he was good enough for Maggie. Or as Meredith put it, make sure he's not a serial killer. In a tender moment, Maggie revealed it was always her mom who gave her the go ahead with a guy so it's nice that Maggie's sisters are stepping in to fill that role now.

It also seems like there may be others coming over to the house as well, since Amelia suggested inviting more guests to the event. Based on the preview, it looks like Jackson may end up being one of the guests, because that won't be awkward at all. Jackson has already made it overtly clear how he feels about Maggie and Clive, purposefully messing up Clive's name and saying things like, "Is Clive still around?" when he comes up in conversation.

Obviously, the only thing standing in the way of Jackson making a move is Clive, and so the new episode will probably either cement Maggie's relationship with Clive, or break it down completely and finally just let Jackson and Maggie be together. The series has been hinting at this hook up for a while, and though some fans seem to be against, there are a few who are in support of the romance. However, Maggie made a good point about how their relationship would be incredibly complicated.

Their parents are married and Jackson's ex-wife works at the hospital. Then again, that's never really stopped anyone before. Pretty much everyone has an ex working at the hospital these days, so it's inevitable for that not to be a complication. It's the sibling thing that really has people uncomfortable, even though Maggie and Jackson are not actually related.

Regardless, people would happily take a pass on this "Jaggie" ship, but they may not get their way. It seems the show is pushing these two together, and whether it's just for a fling or something long lasting, it definitely appears like it could happen. Poor Clive; he probably never stood a chance.