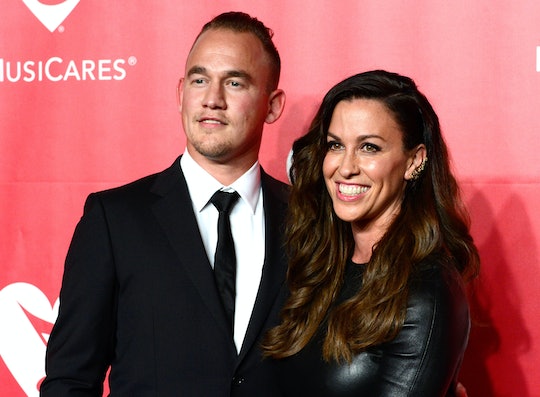 Who Is Mario Treadway? Alanis Morissette's Husband Is About To Be A Father Again

Spoiler alert: You might be seeing the name "Mario Treadway" in the news today — and in the coming months. That's because a prominent singer had some big news to share about her family on Monday, March 25. But who is Mario Treadway? As it turns out, Alanis Morissette's husband is about to be a father again.

The "Ironic" singer took to Instagram on Monday to reveal she's recording new music — with an unmistakable baby bump, to boot. Yep, Morissette is expecting her third child with her husband, Mario Treadway, Us Weekly reported. They already have an 8-year-old son named Ever and a 2-year-old daughter named Oynx, according to the publication. Although it isn't clear yet when Morissette is due, her fans are over the moon for her.

If you're anything like me, Alanis Morissette's album Jagged Little Pill was your jam back in the day. But you're probably wondering about now: Who the heck is her husband? For starters, the pair tied the knot back in May 2010 during a private ceremony in Los Angeles, according to Today. So they've been married for almost nine years at this point. A quick Google search also enlightened me that Mario Treadway, 38, is better known by his stage name, Souleye. That's because — like his talented wife — he's knows the music industry well. Except, he's actually a rapper.

Interestingly, Treadway has actually collaborated with Morissette for a song titled "Snow Angel." The pair enjoyed working together musically for the song, as well as the 2017 music video. "It was an honor to work with my wife on this song," he told Fuse of the video. "Not only does she inspire me as an artist, but she ceaselessly fluffs my ego. She is also hilarious so we were having a blast together."

Morissette also chimed in about their collaboration, describing the visuals of the music video. "I love the literal and figurative dance between the masculine and feminine — within and without — in this song and video," she told the publication. "The delicate bandying of action and reaction shows the empowered and vulnerable versions of each. I adore working with Souleye having been a fan since the day I heard one of his songs for the first time."

Morissette opened up about her marriage to Treadway back in 2015 during an interview with People. She revealed both her philosophy on relationships as a whole, as well as her secret to staying together. "Relationships go from infatuation to power struggle and then most people break up. I think it’s getting juicy as we’re going on the third phase of helping each other heal and grow," she told the publication, adding:

Flirting is nice … dates, gifts, and compliments. Anytime he says anything about me emotionally, like 'Wow, you’re really nurturing' or 'really patient,' that’s like full-blown sexy time for me.

And there you have it! Alanis Morissette's husband, Mario "Souleye" Treadway is a well-known rapper. (And apparently I live under a rock.) He's also about to be a father of three — so I would expect to see his name in headlines again in the coming months. Congrats!