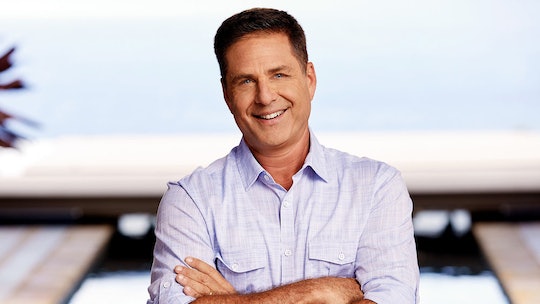 Everything old is new again and in the case of late-aughts reality TV nostalgia, that means Temptation Island is poised to make a return more than 15 years after the original went to air. The Fox series fizzled out after the first season and was then cancelled in Season 3. But now USA Network is reviving the reality show with its original host, which may prompt viewers to wonder: who is Mark L. Walberg? For starters, he'll beat you to any jokes about his name or a certain other reality show host he resembles.

"I share a name with Mark Wahlberg and I look like Chris Harrison, so I’m lost in the shuffle of their success," is his one-liner about it, according to a 2014 interview Walberg did with Vulture. So what has he been doing for the past 15 years? Temptation Island's part-time host, part-time relationship therapist has been keeping busy. He's been hosting Antiques Roadshow on PBS since 2002, and has a handful of other reality TV hosting gigs under his belt, too. He hosted the two-season long Game Show Network series Russian Roulette from 2002-2003, as well as the Fox game show The Moment of Truth. The latter ran for three seasons from 2008 to 2009 and memorably involved a format in which people told increasingly "embarrassing" stories for cash prizes. I can only imagine what would happen if that show was rebooted in shameless-millennial-student-debt-saddled 2019.

Walberg also hosted the finale of Fox's Joe Millionaire, in which 20 women went to France to compete for the affections of an alleged millionaire. Spoiler alert: the Joe in question was actually a humble construction worker named Evan, and the test was to see if the women really wanted Joe (Evan) or were only after his money. Yeah, maybe we don't remake that one.

Temptation Island promises fans that the reboot has been updated to work in the era of dating apps and DM slides. The series follows four couples at a "crossroads" in their relationship who ship off to a tropical island where hot singles await to test their bonds.

The original series appears to have been a little more cutthroat than the updated show — and basically begged the couples to cheat and tank their entire relationship. USA's new version promises something a little tamer and the singles are actually genuinely looking for love, too. Explained Walberg in an interview with the Arizona Daily Sun:

We acknowledge their journey more. It may have been the case before, but we sort of looked at them as tempters. Now we’re really looking at the fact that these people are also at a crossroads. They are hoping to find love, and it’s not so much about them trying to just break up a couple. It’s also maybe about one of these people is better for them too. I like that it’s a two-way street now.

It looks like this version is at least trying to be a little more subtle. The first episode of the new Temptation Island is available to stream online, and the series premieres officially on Tuesday, Jan. 15.