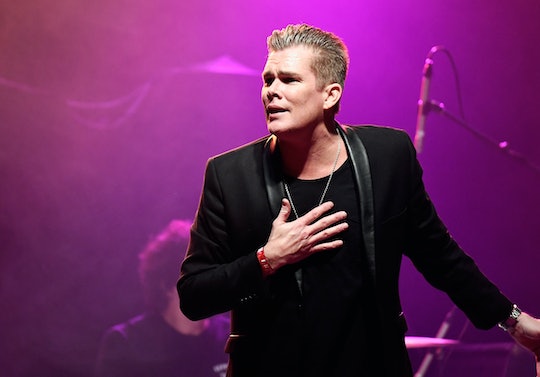 Big Brother fans can't wait to finally see what the U.S. edition of Celebrity Big Brother has in store. People are already excited because the cast looks incredible and includes a lot of familiar faces like Mark McGrath, though some may not know this rock star off-hand. So who is Mark on Celebrity Big Brother? He's got a bit of a wild side.

Mark became well known as the frontman for the alt-rock band, Sugar Ray. The band found huge success in the '90s with popular songs like "Every Morning" and "Fly," however, their popularity began to fade out around the early 2000s. Shortly after, the band decided to take a hiatus and during that time Mark decided to host Extra, an entertainment news show. Since then he's pretty much stuck with TV work, becoming a host for series like Pussycat Dolls Present: Girlicious, The Greatest, Don't Forget the Lyrics!, That's So 90s, and Killer Karaoke.

Similar to some of his other houseguests, Mark has also competed on The Apprentice and he's appeared on other reality series like Celebrity Wife Swap. More recently, you may have also spotted Mark in Sharknado 2: The Second One and Sharknado 3: Oh Hell No! He was also in the film, A Second Chance, which came out last year.

As for his music, Mark did release a solo EP back in 2015 titled Summertime's Coming, but he hasn't released any new music since then. That being said, he does continue to tour with the band. Last year he was part of the I Love the 90's summer tour, which also featured Naughty by Nature, TLC, Biz Markie, Montell Jordan, and a few others. It hasn't been announced yet if the tour will continue again this year and if Mark will be a part of it.

Besides his talent, Mark is additionally known for sometimes doing outrageous things. For example, an old video of Mark yelling at a teen who called him "Sugar Gay," resurfaced in 2015 and unfortunately many began to know him for that rather than for his music. Although less outrageous, Mark was also put in a bad light when he, along with Sugar Ray guitarist Rodney Sheppard, were sued by two former members of the band, Murphy Karges and Stan Frazier, in 2013.

Karges and Frazier claimed Mark bashed them on Twitter and "cheated them out of money, as well as prevented them from rejoining the band," according to The Hollywood Reporter. The pair also claimed Mark tried to "misappropriate the Sugar Ray trademark by licensing it to a newly created shell corporation" and made demands to get paid at least $10,000 per live show. Of course, Mark countered those claims, saying they were false. It's unclear how or when the court case played out.

Besides all that drama, Mark seems to be living a pretty happy life. He married his longtime love, Carin Kingsland back in 2012, and the couple have twins, son Lydon and daughter Hartley. In his cast bio for Celebrity Big Brother he said "being away from my family" would be the most difficult part for him being in the house.

However, thankfully for him, this edition of Big Brother will be shorter than most and Mark revealed in his bio that he'll be using that fact as part of his strategy to win the game.

"Since this is a truncated, expedited version of the game, playing the wall might not be the best strategy," he explained. "Hearts are gonna be broken early and there's nowhere to hide. So I figure you might as well come in hot!" Suffice to say, you shouldn't expect Mark to be a floater. He plans on playing the game to win.

You can meet Mark and the rest of the Celebrity Big Brother houseguests when the show premieres Wednesday, Feb. 7 at 8 p.m. ET on CBS.