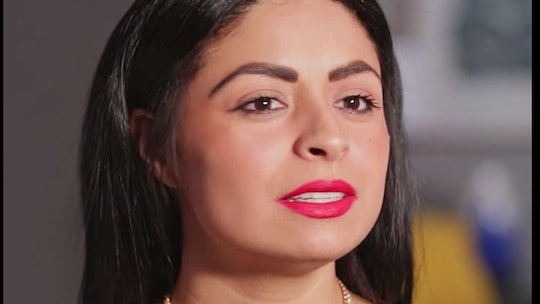 Newcomer Marta Has An Interesting Story On '90 Day Fiance'

This season of Before the 90 Days is speeding by, but there was one pair the audience hadn't met until the last episode: Marta and Daya. Who is Marta on 90 Day Fiancé? Unlike the other couples so far this season, she hasn't yet met her long-distance love interest.

Apparently, Marta is a single mother living in Milwaukee. She is Catholic and works as an exotic dancer and she mentions on the show that other women in her family have worked as exotic dancers as well. Both Marta's religion and profession have her nervous about meeting Daya, the man she's been talking to abroad.

Daya is (apparently) a 26-year-old Muslim man living in Algeria. When talking about what drew her to Daya, Marta said, "American guys, they want no strings attached, no commitment. That’s just the kind of culture we live in right now and it makes dating hard, but I do want to get married one day and I think I finally found the one." The two met the way every other couple on the show has met: on social media. Daya was so handsome that Marta thought he was a catfish at first but no, they've video chatted and he appears to be the real deal.

Daya's initial friend request "didn't scare" Marta, it intrigued her. They started messaging back and forth — despite the fact that he only speaks Arabic and she only speaks English. They write to each other by translating their own messages before they send them. Perhaps Paul and Karine should tell them how hard relationships are when you don't speak each other's languages. Regardless of the language barrier, Marta believes it is true love. She said, "He is somebody that gives me hope and a future that I one day want but we cannot just continue this pen pal relationship. So I’m going for two weeks to Algeria to meet in person."

Language isn't the only potential hardship in Marta and Daya's relationship. Marta believes that her being Catholic could serve as an obstacle for him. In the preview for the upcoming episode, Marta asks Daya how he feels about her cross necklace; viewers don't know his answer yet, but it didn't seem to be positive. Furthermore, Marta is sure that the Daya, being raised in Algerian culture, won't be down with the fact that Marta makes her living as an exotic dancer.

Marta's mother brought up both these concerns when the two went for mani-pedis together. She's nervous about her daughter going to Algeria to meet a man she doesn't know, especially with their many differences. She even went to a psychic that predicted something bad was going to happen.

Despite her mother's warning, Marta is determined to meet Daya in person. Even her two children know about him and how much their mother likes him. Fans will have to keep watching through the rest of the season to see Marta and Daya meet — if they even get there — but this first appearance was a great chance for viewers to get to know Marta as a person, especially because she's introduced so late in the season.

Who knows where Marta and Daya will end up in the end. But I'm keeping my fingers crossed.