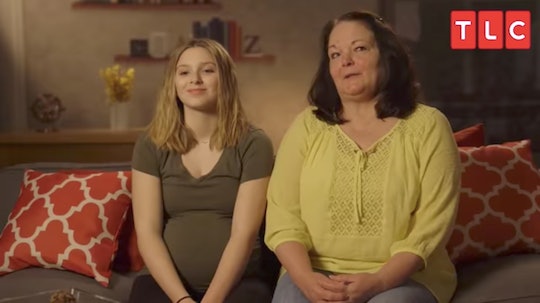 Get To Know McKayla From TLC's 'Unexpected'

Move over 16 and Pregnant. TLC has just debuted its very own show about teen pregnancy and it is kind of riveting. So riveting that you'll probably want to know more about the lives of its young stars. So who is McKayla on Unexpected? From everything I've been able to gather so far, she looks like she's making it work, all things considered. She obviously loves her baby and is working on juggling that as well as being, you know, a teenage high school student. Nobody ever said this was going to be easy.

Unexpected premiered on TLC on Sunday, Nov. 12, and introduced three teenage girls expecting their first child. The show also introduced viewers to the girls' families, including their moms and grandparents, their boyfriends, and even sometimes their boyfriends' families. The purpose is to show that while obviously the teen moms have huge struggles to overcome in the future, the pregnancies impact everyone around them as well. Luckily for McKayla, she seems to have a big, warm support system standing behind her, even if the family dynamics are not without their share of drama. Her boyfriend Caelan appears devoted to her, Caelan's mom has been supportive, and McKayla aso has her adorable, doting grandparents behind her 100 percent.

McKayla's bio on the TLC website describes her situation as the series begins. She's balancing normal teenage activities (like prom) with the difficulties of having a baby on the way and a renewed relationship with her mother. The official description reads:

McKayla, 16, was raised by her grandparents since her teenage mother Shannon was largely absent during her childhood. Now McKayla is shopping for prom dresses that fit her growing baby bump with soon-to-be father Caelan. As she preps for prom, McKayla reestablishes a relationship with her mother, also pregnant, who now wants to be a bigger part of her life in the few weeks before the baby arrives.

In the show, Caelan's mom is wary of Shannon, a sentiment that seems to be echoed by fans. But McKayla is fiercely defensive of her mother, going on Twitter to explain how much she loves her mom and forgives her for what happened in the past. She says that people who are critical of her mother have "no clue" what the family went through. She continues that though the family experienced a lot of hurt, they have "also had a ton of love."

But even with the struggles of high school, new motherhood, family drama, and being on a reality show, McKayla appears to be handling everything with aplomb. She has her own Youtube channel with over 100,000 subscribers. On this channel she talks about all the issues she goes through in her day-to-day life. She talks about her son's favorite things (his name is Timmy), co-sleeping, the sheer exhaustion of getting from class to class while pregnant, stretch marks, and how her relationships with family has changed since getting pregnant. She also does all of this with Kardashian-like nails which I totally approve of.

Unexpected may not give the audience the full story of this young woman's life, but it does a good job of introducing her and some of the issues she's had to deal with since getting pregnant and giving birth to her young son. The other moms on the show include 15-year-old Lexus, whose mother and grandmother were both also teen mothers, and Lilly, who says she had no idea how easy it was to get pregnant.

According to the official website for the show, "Unexpected is a journey of love and concern, fear and hope. We’ll see all the ups and downs. From proms to baby showers, sweet 16s to graduations, every step of the way will continue to define each family’s evolution." There's nothing easy about this situation, but I certainly hope for nothing but the best for McKayla and her new little family.