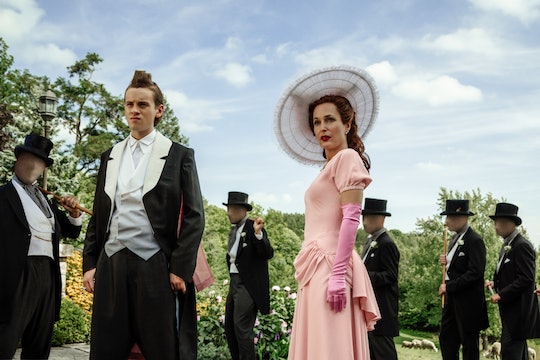 Fans Are Going To Worship Media On 'American Gods'

Bryan Fuller, the co-showrunner of Starz's latest series American Gods (alongside Michael Green), has a habit of working with the same actors time and again. Orlando Jones (who plays the African trickster god Mr. Nancy) and Jonathan Tucker (who plays Low Key Lyesmith) have both appeared in Fuller's earlier shows. But as a bonafide Fuller fan, I'm most pleased to be seeing Gillian Anderson (of The X-Files fame) make an appearance on American Gods playing Media — Anderson last worked with Fuller on Hannibal. But who is Media on American Gods?

Like Technical Boy, who was introduced in the series premiere, Media is one of the New Gods. At odds with Old Gods like Mr. Wednesday, who is busying himself riling up his fellow downtrodden ancient deities, Media enjoys plenty of worship from modern Americans, who are obviously more than a little bit obsessed with technology and TV. Case in point: you're reading this article about a TV show on your phone or computer right now, aren't you? Exactly.

The interesting thing about Media is the form she takes when she appears. Given that she's the personification of television, she takes on the appearance of various major icons in pop culture. In the book of the same name on which the series is based, Media is able to communicate with Shadow through the actual TV, appearing as Lucy Ricardo in I Love Lucy. Anderson already shared a behind-the-scenes look via Twitter at that particular incarnation of her character, and I basically can't wait to see it in action on the series.

She's also set to appear in the guise of Marilyn Monroe, according to another BTS photo she shared.

A compilation photo shared by Fuller on Twitter also shows Anderson as Media-as-David-Bowie and Media-as-Judy-Garland.

In the novel, Media is at odds with Wednesday and his group, even repeatedly attempting to recruit Shadow to work for her instead. Based on the promo for the upcoming episode, Media is set to make her very first appearance on the show in the second installment, "The Secret of Spoon." The promo shows Shadow looking decidedly confused in an electronics store, wondering whether he's losing his mind. And if there's anywhere for him to come face-to-face with the god(dess) of TV for the first time, it's in an electronics store surrounded by huge televisions.

You can catch the next episode of American Gods, which airs on Sunday, May 7 at 9 p.m. ET on Starz.