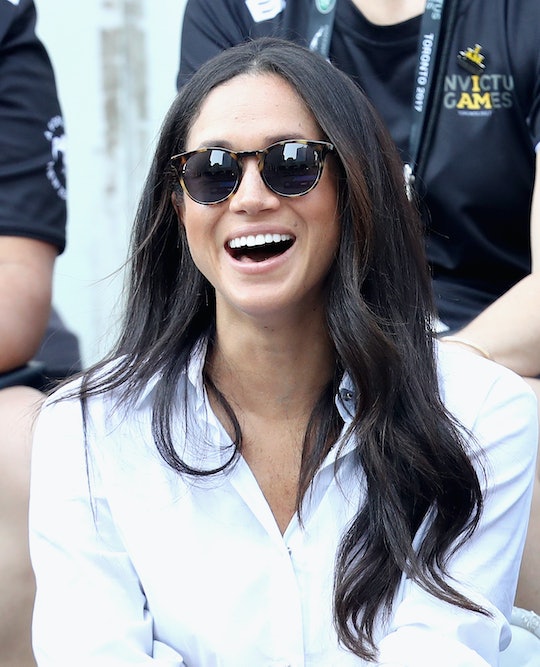 Here's What We Know About Meghan Markle's Ex

Everyone who loves a good royal wedding woke up to some exciting news Monday morning: Prince Harry and Meghan Markle are engaged. Queen Elizabeth II is reportedly "delighted" that the American actress will soon join Britain's most famous family, and there are plenty of regular people from both sides of the pond who are probably even more psyched for the spring 2018 nuptials. And the fact that 36-year-old Markle was previously married — a relative rarity among royal spouses — won't change that. But it certainly does spark some interest in who Meghan Markle's ex is. American film producer Trevor Engelson may amount to just a footnote in Markle's love story with the prince, but he is part of it all the same.

Prince Harry and Markle's union will mark the first time that an American has married into the royal family since 1936, according to The Washington Post, but the sure-to-be lavish ceremony won't be her first. Markle, who is 36, and Engelson enjoyed a wedding celebration that took place over the course of four days in Ocho Rios, Jamaica, in 2011, having dated since 2004. The couple did not last as long as husband and wife, though, divorcing just two years later.

She and Prince Harry officially confirmed that they were dating in November of 2016, although friends know that they were together several months before, NBC News reported.

Prince Harry and Markle made their first public appearance as a couple at the Invictus Games, a multi-sport event for disabled veterans that the prince himself founded, in September. And given Markle's demonstrated dedication to charitable causes, such as acting as an advocate for UN Women, philanthropic pursuits just may be one of the most notable passions that the two share.

For Markle and ex-husband Engelson, on the other hand, the most obvious shared interest is surely show business. Los Angeles native Markle is famous for her role as lead character Rachel Zane on the USA Network legal drama Suits, which she left after the recent wrap of Season 7; Engelson is the executive producer of high-profile projects such as the 2010 Robert Pattinson film Remember Me, the FX drama series Snowfall, and the upcoming Paramount Network series Heathers, based on the 1988 cult classic film.

But what will surely become one of his most notable projects is currently in the works — and is likely to capture the attention of royal family-watchers just as much as the latest royal wedding.

That's because the as-yet untitled project, first announced back in September, is 100 percent inspired by Engleson's experience watching his ex become a part of the royal family. According to Deadline, the fictional comedy, which has earned a pilot commitment from Fox and which Engelson is co-producing, is about a divorcé who has to share custody of his child with his ex-wife after she marries — who else? — a British prince. Of course, Engelson and Markle themselves do not actually have any kids together and the show's main characters are reportedly not based on either one of them, but the premise unmistakably mirrors real life more than a little bit.

Show business may have also been Markle and Engelson's downfall, however. She landed the role on Suits shortly after they got married, Newsweek reported. Her resulting busy schedule is reportedly at least partly responsible for their subsequent separation. The onetime couple officially cited "irreconcilable differences" in their no-fault divorce.

This time around, Harry and Markle have legions of fans rooting for them all the way. Whatever's in store for this happy couple, they deserve all the very best as they live out their love story.