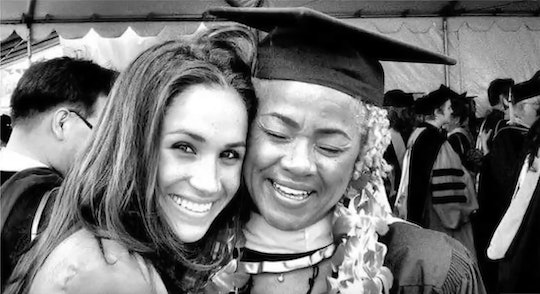 On Monday, Prince Harry and Meghan Markle publicly announced their engagement, first releasing a written statement through Clarence House, and then appearing together in front of photographers at Kensington Palace (where Markle also showed off her gorgeous engagement ring). Prince Harry's family — including his brother and sister-in-law, the Duke and Duchess of Cambridge, his father the Prince of Wales, and, of course, his grandmother, Queen Elizabeth II — all offered well-wishes to the couple, and Markle's parents also shared their excitement in an official statement through Kensington Palace. But who is Meghan Markle's mom, Doria Ragland? The 61-year-old yoga instructor and social worker is now Prince Harry's future mother-in-law, and people are seriously psyched about it.

Honestly, it has to be at least a little bit unsettling to marry into the British royal family. After all, with all the tradition and etiquette and pomp and circumstance, it can't be easy to be an outsider — even if you are a famous actress who is more than comfortable walking red carpets and being snapped by paparazzi. As strange as it might sometimes feel for Markle herself though, it must feel even stranger for her mother, whose normal, everyday, American life is pretty much the exact opposite of her daughter's soon-to-be father-in-law, Prince Charles. Yet that seems to be one of the reasons why Doria Ragland is already such a hit on social media — and why many are expecting her to be the coolest mother-in-law Prince Harry could possibly hope for.

In a statement following the engagement announcement, Ragland and Markle's father, Thomas Markle, said they were "incredibly happy" for the couple, and shared how much joy it brought them to see that their "kind and loving" daughter had found someone "who shares the same qualities." It was a sweet and supportive sentiment for sure, but judging from comments Markle has made in past interviews about her close relationship with her mother, it's also exactly the kind of comment we likely should have expected.

Markle has spoken on a number of occasions about how difficult it sometimes was for her to grow up as the biracial daughter of an African-American mother and a Dutch-Irish father, especially since Markle herself is often assumed to be Caucasian. In July 2015, Markle wrote an essay for Elle, in which she spoke about the way her dark-skinned mother was often assumed to be her nanny when she was young, and when, in the seventh-grade, she struggled to complete a mandatory census asking her to define her ethnicity as either black or white. But despite those struggles, it sounds like her relationship with Ragland has been a major source of love and inspiration for the actress, who once named her mother as one of the most important influences in her life.

Ragland raised Markle as a single mother after she and Markle's father split when she was 6 years old, and they've definitely remained close. In August, Markle gushed about her mom to Glamour magazine, according to The Sunday Times, and said,

My mom has always been a free spirit. She's got dreadlocks and a nose ring. She just ran the LA marathon. We can just have so much fun together, and yet I'll still find so much solace in her support. That duality coexists the same way it would in a best friend.

Markle also spoke about Ragland's insistence that her daughter learn about the importance of giving back — likely a major reason why she has grown to become so passionate about philanthropy (a trait she shares with her husband-to-be). Markle said, “Both my parents came from little, so they made a choice to give a lot.”

Ragland's down-to-earth nature, and her close-knit relationship with Markle has already endeared her to many royal watchers. But even for those who might not normally be into things like royal weddings, the fact that Markle's engagement now means that Prince Harry's mother-in-law will be an American black woman with dreadlocks seems like a huge deal:

Unlike the Middletons' close relationship with Prince William and Catherine, the fact that Ragland lives in California may mean that she may not spend as much time with Markle and Prince Harry now that they are both living in England. But from the sounds of it, it seems like she'll be an important part of their new life together regardless of the distance. And while it's not always easy to bring two families together for a wedding (even when you aren't literally dealing with British royalty), there's no question that Markle and Prince Harry have a lot of shared values in common — not to mention a lot of love and support from the people who raised them.