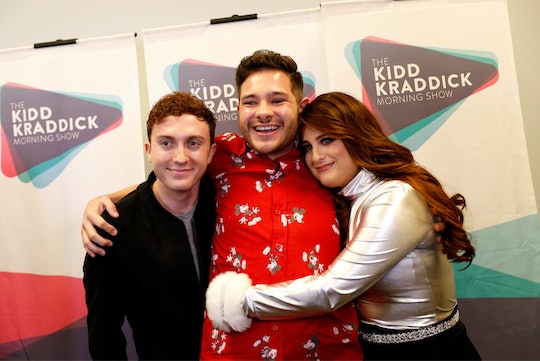 Who Is Meghan Trainor's Boyfriend? Darryl Saabara Got A Shoutout During Grammy Nominations

On Tuesday morning, Meghan Trainor appeared on CBS This Morning to announce the Grammy nominations for Best Record of the Year, Best Song of the Year, Best Album of the Year, and Best New Artist, which Trainor herself won last year. During the show the CBS This Morning hosts asked Trainor about her boyfriend who also came to the talk show that morning to support her. So who is Meghan Trainor's boyfriend? Trainor is dating actor Daryl Sabara and they've been together now for five months.

If you were a kid in the early 2000s you may recognize Sabara from the Spy Kids franchise. Sabara starred in the first three films as Juni Cortez and reprised his role in the fourth film, which was released in 2011. Sabara has also appeared in a variety of different films and movies over the years, including Weeds, Resident Advisors, Generator Rex, and Ultimate Spider-Man. Sabara isn't just an actor though — he's also a singer like Trainor.

Trainor is currently touring as part of the Jingle Ball tour and Sabara has been going along with her, traveling the country. While touring the two have been working on music together and Trainor even said they've already written three songs together. Hopefully fans will get to hear some of this new music on Trainor's next album and maybe even a duet between the two.

On CBS This Morning, Trainor also explained that it was her friend and actress, Chloë Grace Moretz, that introduced the couple and they've been together ever since. This is Trainor's first public relationship in the spotlight and so far it's been going great for her. The couple just celebrated their five month anniversary on Dec. 5 by having a chill night eating sushi and doing puzzles, Trainor told People.

Unfortunately Trainor didn't get nominated for a Grammy Award this year, but fans can probably still expect to see her at the award show. Last year Trainor brought her dad as her date to the Grammys, but it looks like Trainor may have a new date to bring along to the awards ceremony next year.