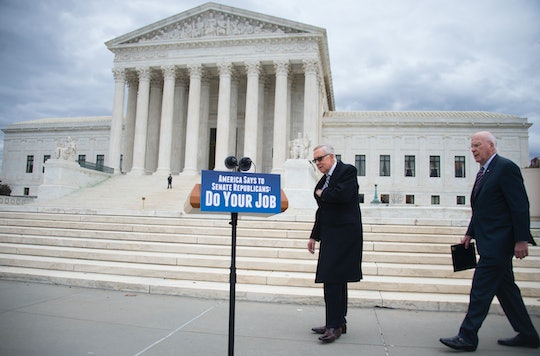 Who Is Merrick Garland? He's Been Considered For The Supreme Court Before

In February, Justice Antonin Scalia died at age 79, after 30 years on the Supreme Court. Since his death, matters have quickly turned to finding a replacement — a matter fraught with controversy, as Senate Republicans have united to stonewall any potential nominees from President Barack Obama in an attempt to keep the Senate from becoming a 5-4 liberal-controlled court, rather than its 5-4 conservative-controlled court of previous years. Regardless, Obama is moving forward with the nomination process, and one of the nominees he is considering is Merrick Garland, according to The Washington Post. That said, who is Merrick Garland?

Garland, chief judge of the U.S. Court of Appeals for Washington, has been considered for the Supreme Court before — in 2010, when Justice Sonia Sotomayor was selected instead, according to The Washington Post. He was nominated to the Court of Appeals in 1997, which means the 63-year-old has nearly 20 years of experience under his belt as a judge. He's been called moderate by The Washington Post and New York Magazine, and Garland has made several centrist — or even conservative — decisions during his time on the D.C. circuit, including the time he joined a ruling to ban Guantanamo detainees from seeking relief in civilian courts.

So, why is Garland someone to consider for the Supreme Court this time around? There's several reasons Obama could pick him. First of all, two decades as a judge definitely means the Harvard Law School graduate is experienced. He's also reportedly well-liked by plenty of Republicans, which means a Garland nomination might actually be confirmed by the Senate, despite Republicans' stance that they will not pass Obama's nomination. He has also ruled fairly conservatively in criminal justice issues, according to Vox, which would appeal to Republicans more than the views of some Democrats who want reforms made to the criminal justice system. This Republican acceptance might be bolstered, as well, by Garland's age — at 63, his tenure would be shorter (and thus less worrisome) than a younger nominee's.

However, many Democrats and civil rights groups are calling for diversity, and Obama has nominated a record-breaking amount of female and minority judges, according to The Huffington Post. For him to nominate a white male — especially at a time when the Democratic party is looking to gain minority votes in the upcoming election — would be a hard sell. The same conservative criminal justice views that might endear him to Republicans could also rub Democrats the wrong way, especially in a time when many are calling for criminal justice reform in the country.

According to The Hill, Obama's nomination won't "necessarily" be coming next week, White House press secretary Josh Earnest said at a press conference, but it's coming. Just last week, Obama assured the nation that he would be making a choice soon, saying "I think it’s important for the Supreme Court to have its full complement of judges."

Until Obama goes forward with a nomination, we'll just have to wait and speculate.