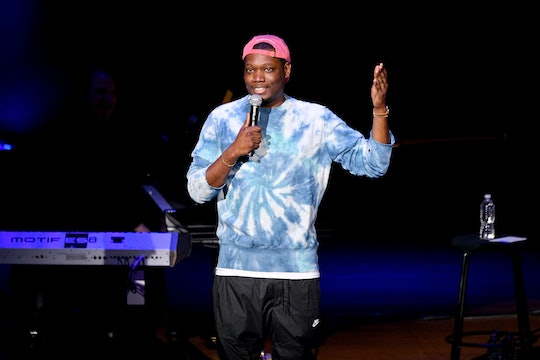 Here's What We Know About Michael Che's Love Life

Keeping track of celebrity romances can be hard — especially when the celebrity in question is a comedian. Coming from comedians, it can be hard to determine if a story is a joke or an actual personal anecdote. As people prepare for the Emmy Awards later tonight, some are wondering about the personal life of one of the shows co-hosts: who is Michael Che dating?

Michael Che is best known for his work on Saturday Night Live, and he is now one of the shows co-head writers. He also serves as co-anchor on the always hilarious weekly segment, Weekend Update, alongside Colin Jost.

Both Che and Jost will host the 70th Emmy Awards on Sept. 17. With those two in charge, it seems crowds are going to be treated to one of the funniest awards shows of all time. On having Che and Jost host, NBC Entertainment chairman, Robert Greenblatt, said, according to Variety, “NBC is thrilled to be the home of this year’s Emmy Awards and with Colin and Michael in the driver’s seat as hosts, along with surprise appearances by other cast members of ‘Saturday Night Live.'"

Being on Saturday Night Live as co-head writer and co-anchor already pushed Michael Che into the public eye, but recent press surrounding the Emmy Awards definitely made the public more curious.

Fans are probably wondering about Che's relationship status thanks to conversation around Jost's current girlfriend. In May 2018, Jost confirmed on Weekend Update that he was in a relationship with Scarlett Johansson. Knowing that Jost is currently dating somebody with a high-profile, it's fair to wonder if the second half of the duo is in a similar relationship.

Recently, Che and Jost appeared together on the Ellen DeGeneres Show. During their segment, the duo opened up about Jost's high-profile girlfriend and whether that relationship has affected their friendship.

"The two of you are close, but what is the relationship with Scarlett? has that affected your friendship?" DeGeneres asked during Che and Jost's interview, "Are you like, the third wheel on dates and stuff?"

Being comedians, the two were naturally able to joke back.

Che had a witty reply of his own, saying, "Actually not anymore, because I'm dating a celebrity, too."

When DeGeneres prodded a little more, obviously interested, Che added, "She's a Times Square Elmo," to the laughter of both Jost and the audience.

Unless you believe Michael Che is actually committed to one of the many Elmos populating Times Square, it's fair to assume that he was doing what comedians do best: joke.

The interview went on to set the record straight, with DeGenres asking if Che had a girlfriend. After he replied, "No", DeGeneres offered to arrange something.

"Who do you like? Because I'm good at arranging things," DeGeneres said.

"This is too much pressure. Is Beyoncé single?" Che joked back.

So, it seems that Michael Che is definitely single, although after his conversation with Jost he may be seen around more. After saying Jost "changed a lot" since starting his relationship with Johansson, Che added, "You don't invite me places and when you do, you ditch me."

To which Che replied, “Well, yeah, because you’re with Scarlett Johansson. I don’t want to tell you to come to this dive bar with me and watch a Yankee game. I feel like maybe you have better things to do now.”

After that brief honesty session, it seems that Che and Jost have sorted out the issue of a third wheel. And, if you don't believe the interview, then keep your eyes peeled. Maybe you can spot Che chilling with Elmo in Times Square.