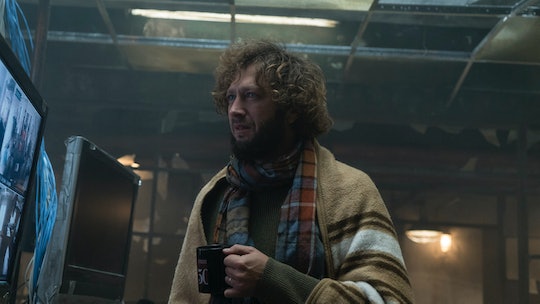 Frank Castle Is Getting A Partner In Crime On 'The Punisher'

The Punisher will feature some familiar faces from previous Marvel Netflix series, but it'll also include some new characters as well. Aiding the Punisher, also known as Frank Castle, is hacker Micro, but who is Micro on The Punisher? He wants to be Frank's friend, but could he actually be a foe?

Although this will be the first time Micro appears in the Marvel Cinematic Universe, it isn't the first time he's been mentioned. During the Season 2 finale of Daredevil, Frank grabbed a disc labeled "MICRO" from his former home. The disc was hidden behind a picture frame that showed a photo of his whole military unit. If you don't recall, it was members of that unit, specifically the Colonel, that turned on Frank and assisted in the killing of Frank's whole family as part of a potential cover up (though initially it seemed as though Frank's wife and kids were just at the wrong place at the wrong time).

Now knowing that Micro is a person, the disc could contain a few things. Perhaps it has the whereabouts of Micro so Frank can find him if he needs him. Or it's information Micro found that he thought might be helpful to Frank.

But what is Micro's backstory? Where did he come from and how does he know Frank? In the comics, it's a bit complicated since it's been changed multiple times over the years. But for the show, Micro, whose real name is David Lieberman, was a member of the National Security Agency (NSA) and faked his own death to hide from his former agency. He's now a member of the Rising Tide, a conspiracy hacktivist group, in which he adopted the name Micro. Now he works to expose the government's secret affairs and hides in the basement level of the power plant on Roosevelt Island. Not even his family knows he's still alive.

Despite Frank having the disc, it's actually Micro who'll approach Frank, because he believes they have a mutual enemy. Although they get off to a rocky start, the two will allegedly be partners throughout the season, but I have trust issues so I'll believe Micro's one of the good guys when I see it. Still, producer Jeph Loeb promises Micro and Frank will have a growing friendship over the series and their friendship will become the heart of the show, according to MoviePilot.

Besides having a common enemy, what will really bring Frank and Micro together is their ideas on family. For Frank, his whole family was killed because of this conspiracy; differently, for Micro his whole family thinks he's dead because of the conspiracy. Micro's hiding out in order to protect his wife and children from the same fate Frank's family suffered from, but that sacrifice will still take a toll on Micro throughout the season. Micro hopes that by working with the Punisher, he'll be able to get his family back. Although Micro isn't in touch with his family, you'll still get to see a lot of them on the show.

Hopefully, Micro and Frank will be able to come up with a plan that will allow them to successfully expose this conspiracy, but based on the trailer it looks like that will be easier said than done. During the clip, Micro is caught by the police and on his way to being arrested. It's possible this is a flashback to what led him to going underground, but there's even more proof Micro and Frank will be found out. In another scene, Frank is shown taking down mercenaries in what looks to be Micro's lair.

Despite this epic team up, Micro and Frank may still be in a bit over their heads. Fans will just have to watch and see if they're able to accomplish their mission and if Micro can return home to his loved ones when this is all over.