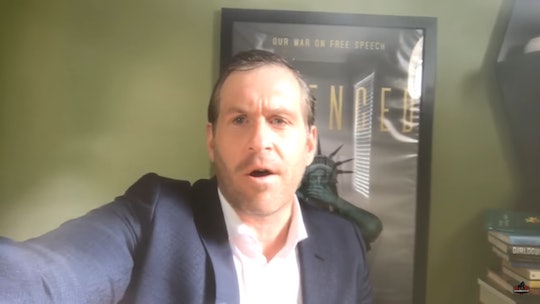 Once upon a time, internet trolls stayed in their own corners of the internet, spouting their opinions on sites like 4Chan and Reddit. These days, they're creeping out into the light with increasing frequency. Milo Yiannopoulos recently went from writing hate-blogs on Breitbart to getting banned from Twitter to winning, then losing, a book deal. This week, everyone's asking, who is Mike Cernovich? He's a blogger and YouTube personality who started his career by writing dating advice posts such as "How to Choke a Woman During Sex" and tweeting about how he believes that there's no such thing as date rape before politics caught his fancy.

Cernovich's most notable work includes promoting the conspiracy theory that Hillary Clinton has Parkinson's disease (based on the evidence that she was seen smiling at campaign events, and once looked up at some balloons). More recently, his claim that Clinton was involved in a cannibalistic pedophile cult led to a North Carolina man's arrest after the man opened fire in a D.C. pizza parlor that he believed to be the base of the cult's operations. But Cernovich's latest claim to fame is that the president's inner circle has spent the past few days promoting him on Twitter.

On Sunday, in a post on Medium (a platform that's open to anyone who wishes to use it), Cernovich "reported" that former National Security Adviser Susan Rice had requested the "unmasking" of Trump associates' names in intelligence reports during the Obama administration. American citizens' names are typically redacted from foreign surveillance reports, but high-ranking officials can ask that they be revealed, or "unmasked," in order to clarify the context, and in fact do so routinely. In the course of her duties, Rice needed to "unmask" citizens on several occasions, she told MSNBC on Tuesday. But unmasking is not a crime.

Cernovich, a self-described "American nationalist," started his first blog in response to a rape accusation, according to The New Yorker (the charge eventually dropped, and he was sentenced to community service for misdemeanor battery). He met his current wife by grabbing and pulling her arm at a bar, according to a New Yorker profile of him. Of his infant daughter, Cernovich told the interviewer, "I’ll be nice to her, as long as she’s not a basic bitch." Now, thanks to Trump's tweet, and another by Kellyanne Conway, some are under the impression that Cernovich is a legitimate journalist. No longer content with promoting the "alpha male" lifestyle, he reveled in the attention he's been receiving in a recent YouTube upload. "Look at my face," he said to the camera. "I’m the media now."